The Ruffian Kick (ラフィアンキック, Rafian Kikku?) is one of Cody's special attacks, introduced along with him in Street Fighter Alpha 3.

The EX Special introduced in Super Street Fighter IV is a nearly instantaneous Light Kick version which travels longer forwards and also passes through projectiles. In Street Fighter V, the EX version hits the opponent twice. It begins with the low-hitting Light version, followed by stepping forward and launching them with the high-hitting Heavy version.

The Light (low hit) and Medium kick (normal hit) versions can be used to keep the opponent guessing if used well; the Keavy kick version can be used as anti-air and can also be used to combo into Dead End Irony. It is mainly used to end combos. It results in a knockdown, allowing Cody to maintain pressure.

This is Cody's Super Charge attack. Ruffian Kick can be used as an anti-air for anticipated or delayed jump ins, such Dive Kick-styled attacks. On hit this attack can be Switch Canceled to the partner, or depending on how late of it's active Frame Data Cody can actually Juggle without a partner due to the game's more flexible mechanics.

The light kick version performs a knockdown and acts very similarly to a Sweep. If it is hit at the tail end of the attack Ruffian Kick is safe and could be even used for pressure.

Ruffian Kick returns as one of Cody's special moves. This attack inflicts more damage than Tornado Sweep and Zonk Knuckle. Like most of his special moves, Ruffian Kick is the primary choice to end combos while inflicting optimal damage and stun. Each version results in a knockdown and can be cancelled from most of Cody's normals. Ruffian Kick can also be linked into his Critical Art. However, it is also Cody's most punishable special attack on block. Each version of Ruffian Kick, including the EX version, is at least -8 on block, leaving him vulnerable to a damaging ground combo.

The strength of the kick button pressed determines the move's startup, damage output, and properties.

The Light version has the slowest startup and inflicts the least amount of damage. However, it hits low at the opponent's legs, forcing them to crouch block to defend against it. Light Ruffian Kick can catch his opponent off-guard. While it deals less damage, he gets better okizeme. After knocking down his opponent, Cody can dash forward and follow up with Crouching Light Punch to beat out 3-frame normals. He can also keep his opponent guessing by going for a regular throw or his command throw while his second V-Trigger is active.

Medium Ruffian Kick has a faster startup and longer range than the Light Version. It also inflicts slightly more damage. The Medium version is effective for inflicting solid damage, while still maintaining offensive pressure on his opponent. It also has more pushback on hit. Even though Medium Ruffian Kick knocks his opponent back about midscreen, Cody can still dash forward and follow up with a Standing Light Kick.

The Heavy version inflicts the most damage. It also has the fastest startup. During the startup frames of Heavy Ruffian Kick, Cody is invincible to mid-air attacks at the head. This makes it a decent anti-air attack if properly spaced. If Cody does hit an airborne opponent with the Heavy version of this move, it puts them in a juggle state, allowing him to follow up with a Medium Ruffian Kick, EX Zonk Knuckle, or his Critical Art. However, the main drawback for Heavy Ruffian Kick is that it does not hit crouching opponents. In order to guarantee that the Heavy version hits his opponent, Cody needs to cancel from Standing Heavy Punch since it forces them to a standing position.

EX Ruffian Kick has a slightly faster startup than the Light Version. It does not hit airborne opponents and does not make Cody invincible to projectiles, unlike previous versions. While the damage inflicted is minimal, it launches his opponent into the air, allowing him to follow up with another attack. Cody can link into Heavy Ruffian Kick for optimal damage, or can cancel into Light/Medium Ruffian Kick for better okizeme. If the first hit is blocked, Cody does not perform the second kick. 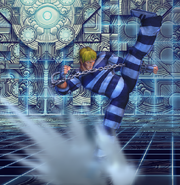