Saba-Ori is one of E. Honda's throws dating back to Street Fighter II.

E. Honda's forward throw leaves his opponent fairly close to him. While this does slightly less damage than his back throw, E. Honda can maintain offensive pressure as his opponent quick or back rises. In Street Fighter V, he can fish for Crush Counter hits with Crouching Heavy Punch to beat out his opponent's 3-frame normals. He can also hit-confirm Standing Heavy Punch into Sumo Headbutt. Another option is to immediately perform Sumo Smash to go for an ambiguous cross-up and open up their defenses for extra damage.

Even though this attack does significantly less damage than his command throw, it has a faster recovery. This means that E. Honda can still counter his opponent if they jump to avoid his grabs, giving him time to use his anti-air moves to clip them out of the air. By mixing E. Honda's normal throws with his command grabs and pressuring attacks, it puts the opponent in a difficult situation where they are forced to guess his next move. 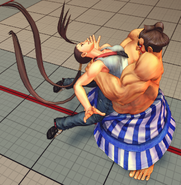 Gif animation of the Omega version on Ibuki.

Saba-Ori
Add a photo to this gallery

Tawara Nage SFAIII
Add a photo to this gallery
Retrieved from "https://streetfighter.fandom.com/wiki/Saba_Ori?oldid=202804"
Community content is available under CC-BY-SA unless otherwise noted.