Homework, cleaning up[1]
Sarai Kurosawa (黒澤 早雷, Kurosawa Sarai?) is a non-playable minor character who appears in some games of the Street Fighter series. She is a teenage girl who is the best friend and classmate of Ibuki who lives in the Glade of Ninjas.

Sarai is a purple-haired young girl who is usually seen wearing visor-style sunglasses atop her forehead. Her hair is usually seen done up in a short ponytail, and she is either seen wearing a school uniform of the same style as Ibuki's, or a ninja outfit that also resembles Ibuki's own.

It is possible the village elders allow her to go to a public school alongside Ibuki, as she is seen coming out of the same public learning institution as Ibuki, alongside the same uniform in Ibuki's Street Fighter IV story.

Sarai's personality is not gone into in-depth in the Street Fighter games, though her Shadaloo Combat Research Institute profile states that she dislikes cleaning up and doing homework. She is extremely skilled at tree climbing, taijutsu, and ninjutsu, and enjoys puzzle games.

In the UDON comics, Sarai first appeared to be rather weary, but understanding of Ibuki's lifestyle and status as a ninja. Upon the arrival of Makoto, Sarai showed signs of uncertainty about the girl, and felt that Ibuki was likely to be in danger if she accepted Makoto's challenge to a duel. Sarai was angry that Ibuki never sent her any signs of being alright after their meeting after school, and took this as a sign of being pushed away. Not being a martial artist, she felt that Ibuki was out of her league and needed to be with her kind, thus leaving her for months.

Later on, she explained her jealousy and felt that she was just too normal of be worthy of being friends. She was happy to hear Ibuki explain otherwise, and was especially happy that Ibuki put in a recommendation for her to become a Ninja as well. The two rekindled their friendship ever since.

In Ibuki's prologue for Super Street Fighter IV, Sarai is shown along her, walking their way back home from high school while Ibuki complains about what a disappointment the training camp's locations were.

She also appears in Ibuki's Super Street Fighter IV ending, where she is late for her ninja exams and sneaks in by using a camouflage sheet. However, their master manages to see through Ibuki's disguise and throws several kunai at her position, causing her to freak out and duck to avoid them.

Sarai is seen briefly in the end of Ibuki's character story, calling her on the phone as she returns to the Glade of Ninjas after working for Karin. Sarai has no spoken dialog in this appearance.

Sarai appears in Ibuki's Street Fighter III: New Generation ending. While Ibuki was seriously focused recalling the dialogue she had with Gill after her victory, then suddenly feeling somebody was approaching and thinking is trying to sneaking up on her, immediately throws several kunais at that direction. Sarai, who shields herself from the attack with her book bag, later gets angry at Ibuki for carelessly attacking her and ruining all her high school's textbooks.

In UDON's Street Fighter Legends: Ibuki, Sarai does not live in the Glade of Ninjas like in the games, and is instead the only student at school who knows Ibuki is a ninja. Later in the comic, Ibuki befriends Makoto and Elena, causing Sarai to become jealous that Ibuki is friends with other warriors. She later reveals that she was jealous of the three warriors and just wanted Ibuki to herself. After this, they make up and become best friends again, and Sarai even travels with Ibuki to challenge Oro in combat. Sarai later becomes a ninja herself.

Sarai makes a cameo in Street Fighter X Tekken on the Mishima Estate stage. On the top floor she is shown arguing with Kunimitsu from the Tekken series because she refused to fight Sarai. On the second floor, she is seen chasing Kunimitsu around. 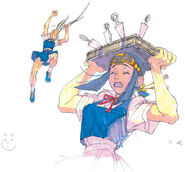 Sketch for the ending scene. 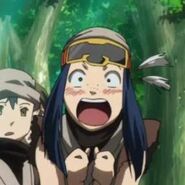 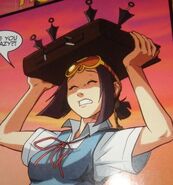 Scene from Ibuki's ending replicated in the UDON's comics.

Small cameo in the background for Street Fighter X Tekken.

Sarai in the background as Ibuki participates in a battle.

Sarai ducking due to Kunai that were tossed her way.

Sarai, Don-Chan, and Elena watching Ibuki battle.
Add a photo to this gallery

Retrieved from "https://streetfighter.fandom.com/wiki/Sarai?oldid=209881"
Community content is available under CC-BY-SA unless otherwise noted.