Losing, being compared to Dan[1]

Sean Matsuda (ショーン・マツダ, Shōn Matsuda?) is a character in the Street Fighter series. He first appeared in Street Fighter III: New Generation. He has an older sister named Laura who appears in the upcoming Street Fighter V.

Sean wears a yellow gi similar to those worn by Ryu and Ken with the sleeves removed at the shoulders, and red fighting gloves. He wears a black belt and fights barefoot. He is Afro-Brazilian and has dreadlocks with the sides shaved off and usually brings a basketball with him everywhere.

Sean is eager to prove himself, and hates being referred to as weak. He often makes a point of bringing up Dan Hibiki, who does not appear in the SFIII series, as a shining example of weakness, and thus someone he hates being compared to.

Sean Matsuda was born in Brazil, though his paternal grandfather was Japanese. A keen basketball player, his main pastime is martial arts. He along with his older sister Laura was taught by their grandfather their family Matsuda Jiu-Jitsu art. Later, Sean saw veteran World Warrior Ken Masters in action at the U.S. Martial Arts Tournament and swore to become his pupil.

After repeated unsuccessful attempts to get Ken to train him, Sean enters the World Warrior tournament to prove that he is a worthy student, but is again unsuccessful - and in fact defeated by Ken himself. After beating Sean, Ken (finding Sean to be a nuisance) instructs him to search for Ryu and not return until he has found and defeated him. Sean finds Ryu and challenges him to a fight, but is defeated time and time again no matter how hard he tries - to the point of severe injury. After recovering from his injuries, he spends an entire year training alone.[2]

Sean then sets off for the U.S Martial Arts tournament to prove that he has become a much greater student since his last meeting with Ken. However, during the tournament, Sean loses to a random fighter during the qualifying rounds in front of Ken. Ken tells him he lacks the discipline and experience necessary to become a true street fighter. After Ken wins the tournament, Sean declines Ken's offer of the championship trophy in acknowledgment of how well he had done, insisting that he will win it himself some day.

Sean appeared along with Ken in Ryu's pre-fight introduction, as well as his ending.

Sean made a cameo appearance in Pyron's CFE ending and in the New York stage as well.

Sean practices the same fighting style as Ryu and Ken (mixed with his family fighting style of Jiu-Jitsu); however, due to his inexperience, there are notable differences between his moves and theirs.

The most notable difference is his projectile, which is only available to Sean as a Super Art. His Shoryuken works much the same way; while he does have a two-handed version of the move, he only performs the "true" Shoryuken in yet another of his Super Arts. This seems to imply that Sean can only use Ken's techniques properly with extreme focus. His third Super Art is the Hyper Tornado.

Sean performs his version of the Tatsumaki with both legs, similar to Dan and his Dankukyaku. He also possess moves somewhat unique to him: an overhead wheel kick and a rushing tackle.

In 2nd Impact, Sean was a lot easier to use and the best choice because of his high damage. Sean can link/combo his Super Arts after some of his special moves, though it will do less damage. His Ryuubi Kyaku has a big pause, making it easy to parry, but it is good for countering fire balls. His Tornado is easy to combo, and his Dragon Smash is a high-damage and high-priority two hit anti-air uppercut.

In 3rd Strike, some of his moves, most notably his Dragon Smash, were toned down in effectiveness and damage, although his Ryuubi Kyaku no longer pauses before execution. Sean was also given many new standard attacks, and two of his special moves were changed to feature all-new animation frames. Sean is often referred to as the "Dan" of Street Fighter III: Third Strike; far from an intentional joke character, he is still difficult to use effectively, due to a lack of safe options. 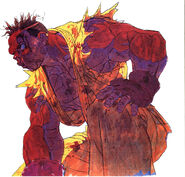 Sean and Ken artwork.
Add a photo to this gallery 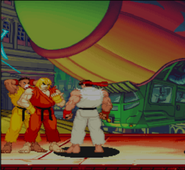 Sean's cameo in Marvel vs. Capcom: Clash of Super Heroes.
Add a photo to this gallery

Retrieved from "https://streetfighter.fandom.com/wiki/Sean?oldid=114256"
Community content is available under CC-BY-SA unless otherwise noted.