The Senkugoshoha (閃空剛衝波, Senkuugoushouha?, "Flashing Air Strong Piercing Wave") is one of Gouken's special attacks in Street Fighter IV, and is a variation of the Ashura Senku used by his brother, Akuma.

Executed by performing a Shoryuken motion? and pressing punch, Gouken glides forward along the ground on a zen-state one-legged stance (not unlike the parent technique) and strikes with an underhand palm. The distance traveled and the damage inflicted depends on the punch button used, with light punch traveling the shortest distance.

The attack travels through projectiles when Gouken is sliding, but not when it is starting up. The EX version delivers two hits upon contact with the opponent, with the second blow being an upward chin-aimed palm with his following hand, causing them to fly up and allowing for follow up.

This move has many combo opportunities, and is best used after any Gohadoken as a follow up, or an Ama no Oroshi, Gouken's back throw that lifts the opponent straight up. As of Ultra Street Fighter IV, Light Punch allows it to be a stationary attack, allowing it capability to reset the neutral game and if blocked, push back to allow for a small evasive opening for reading the opponent's next move. Its EX variation allows it to launch the opponent into the air for follow ups, and provides one of few major backbones for Gouken's combo potential. Senkugoshoha is also an armor breaking attack.

However, properly utilizing the Senkugoshoha has a bit of a learning curve; improper usage of this move will often result in Gouken getting punished, but it's possible with proper spacing to use it as an unexpected poke during neutral game, though it risks getting stuffed by certain moves. Due to the nature of its vulnerable frames at start up and upon impact, it is best to be used as a Counter Hit attack if done alone from afar. Its range is also dependent on the edition version of his movelist; Ultra will only allow Heavy to go 2/3 of the screen, demanding a good sense of spacing and pacing to know when to perform right. 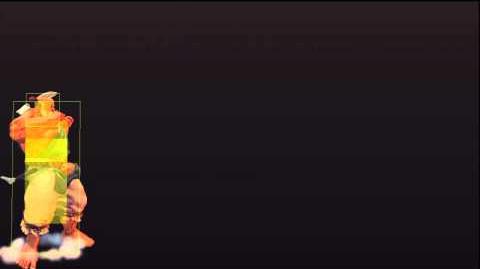 Senkugoshoha
Demonstration of each "version" of Senkugoshoha with the hitboxes displayed.
Community content is available under CC-BY-SA unless otherwise noted.