"Let me be the blesser of all souls."
—Gill, Street Fighter III: 3rd Strike

The Seraphic Wing (セラフィックウイング, Serafikku Uingu?) is one of Gill's Super Arts, introduced in Street Fighter III: 3rd Strike. Like his other two Arts, it is not visible on the character select screen, and is always available to him. In Street Fighter V, this move is Gill's Critical Art.

Executed by performing two quarter-circle forward motions and pressing kick, Gill floats to the center of the screen, and just before the attack properly triggers, he declares, "Let me be the blesser of all souls!". During this time, the attack can be stopped if the opponent hits him; in this case, the Super Gauge Stock is not emptied.[1] Once there, he sprouts six white wings and radiates circular waves of multicolored energy which reach all over the screen.

In Street Fighter V: Champion Edition, this attack is instead executed by performing two quarter-circle forward motions and pressing punch. Gill summons a close-range energy ball of light to initiate the move. If it connects, six wings form on Gill's back as he unleashes his full power, sending off a massive wave of energy in all directions to obliterate his opponent.

In Street Fighter III: 3rd Strike, Seraphic Wing is unavoidable, and cannot be parried. If blocked, it can inflict up to around 25% in chip damage, whereas not blocking can result in an instant KO.[1] The damage inflicted seems to be dependent on where the opponent is on the screen.[1] It can deal up to 20 hits, but after the attack finishes and the wings have disappeared, there is a large window in which he is helpless and vulnerable to attack.[1] However, the only way to deal with this attack without being damaged is to hit him out of it before he starts.

A zoomed out view of the cinematic start up shows the heavenly light better than what can be seen in game.

Full Critical Art in a zoomed out angle.
Add a photo to this gallery 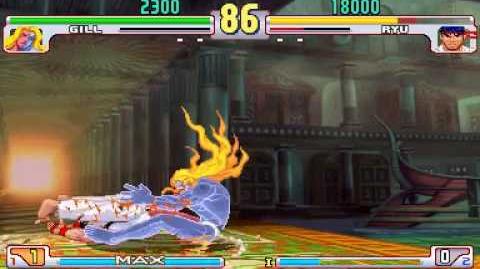 Retrieved from "https://streetfighter.fandom.com/wiki/Seraphic_Wing?oldid=223351"
Community content is available under CC-BY-SA unless otherwise noted.