"In Shadaloo, only those who wield true strength shall survive. If you had lost that strength your death would have been certain...survival is that simple."
—M. Bison, to F.A.N.G (Street Fighter V)

Shadaloo (シャドルー, Shadorū?), originally called Shadowlaw (possibly the result of mispronunciation) is a very powerful and deadly criminal organization that is responsible for dealing biochemical drugs and arms within the Street Fighter universe.

Shadaloo is headed by M. Bison and his three highest minions, Balrog, Vega and Sagat (lowest to highest). They are known as the Four Heavenly Kings (四天王 (してんのう), Shitennō?). F.A.N.G is, as of Street Fighter V, second-in-command of Shadaloo, ranking below only M. Bison and replacing Sagat after his defection.

Initially listed as merely "a mysterious crime organization", the game's literature mentioned little more than listing some of Shadaloo's ranks, as well as the members in order of seniority. Led by M. Bison, Shadaloo's base in Thailand (appearing to be vaguely near Bangkok) played host to the second World Warrior tournament. The Four Heavenly Kings serve as the final bosses for all playable characters.

Initially, Shadaloo's goals and scope were ambiguous at best. They appeared to be smugglers, though of what is not explained. M. Bison is described as "ruling his empire with an iron fist", possibly indicating that he controlled some independent territory. Each of the bosses were motivated by their own self-centered desires, and accepted M. Bison's offer to join his rank based on wealth or opportunity. Balrog was hired as an enforcer to expand his wealth, whereas Vega was a well-paid assassin. Sagat was M. Bison's right-hand man and personal bodyguard, who was motivated by revenge against Ryu.

Some of the other characters (specifically Chun-Li and Guile, later joined by T. Hawk and Cammy along with her unit Delta Red) entered the tournament to defeat M. Bison and Shadaloo.

As more games in the series were produced, more bits of information regarding Shadaloo came to light. In Super Street Fighter II, it was divulged that Shadaloo was responsible for the massacre of T. Hawk's tribe, and that it smuggled biochemical drugs and/or weapons. In addition, a storyline skimping on details was introduced between Cammy and M. Bison, alluding to the fact that Cammy worked for M. Bison before her bout with amnesia.

In Street Fighter Alpha 3, a series of plots showed the downfall of at least one of Shadaloo's bases in Thailand and the destruction of M. Bison's current body, greatly weakening him and the organization. Nonetheless, Shadaloo would continue to have a large presence until and during the second World Warrior tournament, which resulted in the death of M. Bison at Akuma's hand. Shadaloo was shown to be one of the enemies of the Kanzuki family in Karin's storyline.

Tidbits of storyline info shown during or after the games indicate that after M. Bison's death, Balrog sought to replace him as the head of Shadaloo. Due to his being horribly inadequate for the leadership of such a vast empire, Chun-Li was able to systematically shut down Shadaloo operations to the point of its total collapse, leaving Balrog in need of a job once more, as indicated by his intro in Street Fighter IV.

The remaining scientists and smugglers of Shadaloo were transferred over to S.I.N. under management of Seth to work behind the scenes on new weapons and the BLECE project. Unbeknownst to Seth, the scientists also worked on a new body for M. Bison.

By the time Street Fighter V takes place, Shadaloo is still active; M. Bison has developed a new plan involving Black Moons to conquer the world. A Shadow Falls depicts the attempts of Ryu, Chun-Li and various others to stop Bison and his Black Moons; despite a few casualties and various setbacks, they ultimately succeed in vanquishing Bison, freeing the Dolls and stopping the Black Moons.

Ed later founded his own organization as the antithesis of Bison's atrocity, helping those Bison and Shadaloo had wronged.

After the events in Street Fighter V, Shadaloo has fallen (as noted by Urien in his pre-fight quote against Chun-Li) by the time Street Fighter III takes place.

The "Four Kings" are the top-ranking members of Shadaloo, and effectively the head members. The name is based in the Buddhist context of the Four Heavenly Kings (or Shitennou), which is widely used in Japan, including but not limited to the inner circle of Shadaloo. Capcom USA localized the name as "Grand Masters" when originally releasing Street Fighter II.

Estimation of total general members, personnel, and utilities at its peak in the Alpha series[]

Despite minor changes and reformulations through every game, film, TV series and specials launched, the Shadaloo insignia essentially remains the same: a metallic or silvery skull with a menacing visual, adorned with eagle-like wings on the sides and a lightning bolt shaped as a single Nazi-esque sig rune on its forehead, the same rune regularly depicted adorning M. Bison's belt buckle. 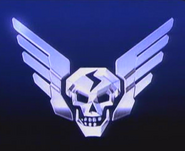 Street Fighter: The Legend of Chun-Li. 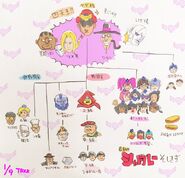 An organization chart of Shadaloo created by F.A.N.G.