Shadaloo Base at Night

It is a base from Shadaloo, with several Shadaloo Soldiers and some Dolls in the background, including Février and März. The left and right edges of the stage can cause special cinematic knockouts if the final blow is landed at the corners. On the left side, the character is thrown into a Shadoloo Jet that starts up and sends them shooting upwards into the sky, leaving behind a cloud of smoke during the victory sequence. 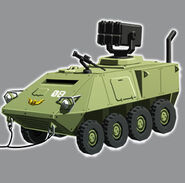 A single person jet used by Shadaloo. It doesn't last much after usage, being easily damaged.[2]

SV-011, a VTOL aircraft developed by Shadaloo. Its concept phase lasted 20 years and the development period was 5 years. It makes a lot of noise during landing.[3]

SV-011's pilot. He received special training and his salary is about 5000 Zenny higher than ordinary soldiers.[4]

Shadaloo Base's left knockout zone. The defeated foe is thrown into a power turbine and then electrocuted briefly before falling to the floor.

Shadaloo Base's right knockout zone. The defeated foe is thrown into a power turbine and then electrocuted briefly before falling to the floor.

Retrieved from "https://streetfighter.fandom.com/wiki/Shadaloo_Base?oldid=199349"
Community content is available under CC-BY-SA unless otherwise noted.