Not to be confused with the character Shadow.

Injustice in the world[1]

Shadowgeist (シャドウガイスト, Shadougaisuto?) is a video game character from the Street Fighter EX series, first appearing in Street Fighter EX2 as a hidden fighter. He is a merciless, cyber-enhanced vigilante seeking to bring down his country's totalitarian government.

Like Skullomania, Shadowgeist wears a white and black full body suit with sun designs on the center and the buckle of his belt. He wears a matching v-belt and orange boots. He also wears light orange gloves, a long red cape and a full faced skeletal mask to conceal his face with a single gold blade on the front.

In his Shadaloo C.R.I. profile art, Shadowgeist's appearance remains largely the same, only both his gloves and boots are yellow.

In Fighting EX Layer, the sun designs on his suit and belt are turquoise and glows in white and neon green. His belt is larger and no longer being in v-shaped, both his gloves and boots are bulkier and segmented, and the color is black and white to match the suit.

Shadowgeist is generally seen with a grim demeanor with little mercy. Despite his brutal tactics, he has a strong sense of justice, and despises those who harm others unjustly. He bears a strong hatred towards the government of his home country due to their role in the murder of his wife and disappearance of his daughter.

Shadowgeist was once a normal man. Living under a harsh dictatorship, his wife was murdered by the government and his daughter subsequently went missing. Burning with contempt, he enhances his body with cybernetic parts, becoming a violent vigilante and taking the name Shadowgeist. In addition to his cybernetics, he also installed a self-destruct device into his body. He fights against the dictatorship of his country in order to protect the people from becoming victims like his family had.

He encounters Skullomania, who believes him to be a super villain.

His artificially enhanced body began to overload just as he finally cornered the mysterious conspirator.
Shadow was able to catch the wirepuller just as he pushed the self-destruct mechanism, causing the building to collapse with both of them still inside. After a moment of silence, the conspirator managed to escape from the rubble and stood up.
However, Shadow stood behind him as well and managed to launch one final strike against him.
"Your twisted paradise ends now."
Shadow, who barely escaped death, lost his powers, exchanging it with life.

There weren't any sufficiently adequate words to describe who he fought. Was it a new form of himself that did not know of yet? A dark side of himself hidden within him that he did not realize until it materialized? Or some kind of skill that he didn't know he possessed until now?
And yet, he felt a very different spirit and sense during the fight.
"Are you truly yourself...?"
The answer to this question became an eternal mystery...[2]

"To fight is to win..." said Shadow as he faded away into the darkness.
Several days later... A shadow appeared along a full moon behind the building of the syndicate, yelling with a loud voice.
"Hahaha, I'm invincible!"

The Shadow knows that he is the most powerful, intelligent, and dreadful figure. The bloody cape that flies magnificently behind him shines as he speaks to his victim, "Have you finished your final prayer? You should be grateful. You have the honor of being killed by me." Afterwards, Shadow disappears into the darkness...

Shadowgeist appears as one of the playable characters in Fighting EX Layer, Arika's spiritual successor to the Street Fighter EX series.

When he finds out his daughter (later revealed to be Sharon) is alive and well in the United States, Shadowgeist continues his life of crime fighting by joining the governed Secret Service in America - in exchange for keeping his daughter safe. He is given a mission by them to eradicate an unknown outbreak of Minus Energy. 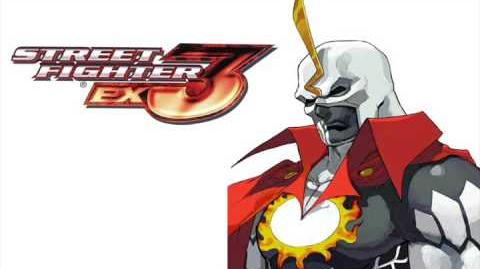