The Shakunetsu Hadoken (灼熱波動拳, Shakunetsu Hadōken?, "Scorching Heat Surge Fist") is the name of a special type of Hadoken introduced in the Street Fighter II series. It is used by Ryu (as well as his evil side), Ken, Akuma and Kage. In Street Fighter V, Akuma's version is dubbed Sekia Goshoha (赤鴉豪焦破, Sekia Goushouha?, "Red Crow Great Char Blast").

The original inspiration for the Shakunetsu Hadouken was a rare easter egg in the CPS1 installments of Street Fighter II, where fireballs would randomly be red rather than their usual blue color. This bewildered many players, who speculated on what causes red Hadokens to appear and if they were more powerful than regular blue ones. Capcom eventually made the red fireball official by adding in the Shakunetsu variation to Ryu's moveset in Super Street Fighter II.[1]

Executed by performing a half-circle forward or backward motion, depending on the character, and pressing punch, the Shakunetsu Hadoken is imbued with thermal energy that sets it on fire.

Ryu's version is considerably less damaging than Akuma's, but Ryu does not charge when using it, thus making his version faster to pull off than Akuma's (about the speed of a regular Hadoken charge). It hits 1 to 3 times, and in certain games such as the Alpha series and in Super Street Fighter II, it can knock a foe down at close range.

In both Alpha 1 and Alpha 2 (and canonically before Alpha 3 and Street Fighter II), both Ryu and Evil Ryu could only perform this via a normal Hadoken motion up close towards the opponent since the projectile becomes the Shakunetsu version only during the first few frames before it turns into a normal Hadoken as it flies onward. It is not until Alpha 2 Gold where both versions revert to the classical half-circle forward motion and are thus able to perform it from any range.

Akuma glows red and charges slightly before releasing it. The projectile hits 1-3 times, depending on the strength of the punch button; this also impacts recovery, with light punch recovering the fastest, and heavy punch hitting the most. Akuma's EX Special version hits three times, recovers as fast as the light punch version, and does some more damage. If executed with medium or heavy punch, it will knockdown an opponent. In Street Fighter V, the EX version also deals steady damage in the form of grey health to enemies near him during the move's startup (similar to Dhalsim's V-Trigger), though should the Hadoken land, it still does the normal damage, removing the grey health with it.

Akuma does not have this move in the Marvel vs. Capcom series. In the Street Fighter IV series, the alternate form of Akuma known as Oni has the Gorai Hadoken, a projectile imbued with electricity instead of thermal energy; its gameplay purpose remains largely the same as Akuma's Shakunetsu Hadoken.

In the Alpha series, Evil Ryu's version is similar to Ryu's: he does not charge when using it, and only hits 1 time. In Super Street Fighter IV, it retains its "charge" property, and functions largely the same as Akuma's, including the EX Special version.

In Street Fighter V, Ryu has no access to the Shakunetsu Hadoken. Instead, more fittingly, it is found in Ken's arsenal. Activating his V-Trigger, Heat Rush changes all of his regular Hadokens into the fiery Shakunetsu Hadoken. As in the Alpha series, the move causes a knockdown irrespective of the distance it hits at.

Kage's fireball shares similar properties to Akuma's Sekia Goshoha. He charges slightly and glows red prior to releasing the projectile. The fireball hits 1-3 times, depending on the strength of the punch button pressed. If two punch buttons are pressed, then the EX version is performed, hitting the opponent four times. Shankunestsu Hadoken is the only projectile in Kage's arsenal that travels fullscreen (with the exception of Airborne Hadoken.) It can extend combos in the corner, thanks to its multi-hitting properties.

Prior to Street Fighter IV, Akuma and Evil Ryu's versions could be nullified by another single-hit projectile, limiting the move's usefulness to 'chipping' an opponent on wake-up or forcing them to parry it (thrice) in the same scenario (Street Fighter III only). However, in the Street Fighter IV series, every hit of a projectile counts, allowing the heavy punch version to beat out regular and EX projectiles and still hit. Though this gives Akuma an option to win 'projectile wars' without using any meter, it requires him to preempt the opponent's moves, and is more often used for its chip damage.

In Street Fighter V, Ken's version causes a knockdown on hit without needing to 'charge' like Akuma's; thus combining the best properties of Ryu's and Akuma's versions. This is obviously offset by the inherent time limit on his V-Trigger. The knockdown effect of this move helps immensely in maintaining Ken's already excellent offensive pressure while his V-Trigger is active.

In Super Smash Bros. for 3DS and Wii U, Ryu can unleash a Shakunetsu Hadoken by performing a half-circle forward motion and pressing either the Attack or the Special button. It deals 1% more damage than a regular fast input Hadoken (Fast True Hadoken) and 2% more damage than a regular slow input Hadoken (Slow True Hadoken). It also does more shield damage, knocks the target back further and hits multiple times (five in total, the first four do 1% damage plus the last hit 4%).

In contrast, the Fast Shakunetsu Hadoken is great for spacing far opponents and will true combo all non-floaty characters (2*light Down-Tilt into strong Down-Tilt cancelled into Fast Shakunetsu Hadoken). The multi-hits allow Ryu to set up pressure and possible following setups in a match. But it also has a downside to it too. Since the player has to do a longer motion than for the True Hadoken, they need more time to pull the motion off. 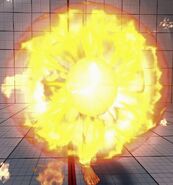