Megumi Ogata (EX2)
Miki Ito (EX2 Plus - EX3)
Suzuka Kimura (Fighting EX Layer)
Sharon (シャロン, Sharon?) is a video game character from the Street Fighter EX series, first appearing in Street Fighter EX2. She is an agent for a secret intelligence group, currently living a double life as a nun for the orphanage she was raised in.

Sharon has red (orange in her Shadaloo Combat Research Institute artwork, said to have the color of a rose in her profile[1]) hair that is short length (shoulder length in the back) in a full fringe, and brown eyes. She wears earrings on her ear and a rose tattoo on her neck.

Her primary appearance, is a short sleeved black (brown in her Shadaloo C.R.I. profile) leather mini collared jacket with a black bra underneath, matching pants with two triangular designs at the right side with three belt buckles to keep the right sleeve of her pants attached and black heels. She also wears long grey gloves and wields firearms such as a handgun or a sniper rifle.

Her alternate appearance is still her primary outfit; her mini collared jacket, bra and heels are red and her pants are dark red.

In Street Fighter EX3, she retains her original outfit only her black bra is recolored to blue.

In Fighting EX Layer, her red shoulder length hair at the back is now cut short to make her completely short hair and her long fringes are now parted at the right side to make it resemble a full fringe and has a single fringe on the left. She now wears a different outfit but retains her black leather mini jacket from her Street Fighter EX2 outfit. She has white folded sleeves and the collar of her jacket. Her black bra and her matching pants are replaced with a long red, sleeveless dress that resembles a qipao. The dress also features a plunging neckline as well as a dark red collar. The edge of her dress skirt has a single gold rose design, a large dark brown belt with a matching side belt with a gun holster on her right where she keeps her main handgun and a gold buckle with the sign "SIA" at the front. She has a brown mesh pantyhose and different pair of black heeled boots (her right boot is after the right knee and her left one is thigh-high). She wears dark red gloves and has two black belts on her right thigh below the knee and has a single belt on her left one. She is accessorized a necklace with an oblong-shaped turquoise pendant on her neck and an oblong-shaped yellow earrings on both of her ears.

Sharon was entrusted to a monastery when she was still an infant. As she grew up, Sharon began leading a double life, working as an A-Class agent for a secret intelligence organization, as well as a nun raising orphans at the monastery she was raised at. Having never known her true parents, Sharon spent everyday wondering who they were and whatever happened to them.

One day, Sharon's superiors gave her orders to assassinate a certain individual from a neighboring country. While investigating the crime syndicate her target belonged to, she learned that one of the group's key member has the same rose tattoo she has on her chest. Sharon decided to disregard her duty and infiltrated the syndicate to ascertain the identity of this individual and whether or not the person was related to her. While chasing the person with the rose tattoo, she approached the mastermind of the organization. However, she was unable to capture either. The person with the rose tattoo had the same abilities and fighting style Sharon had, managing to overpower her.

For insubordination against her organization, as well as defying her monastery's commandment on pursuing personal vendettas, Sharon was placed on house arrest for a month. After serving her sentence, Sharon went on to continue her search for the person with the rose tattoo.

Sharon defied her vow as a nun to avoid personal struggles, as well as her orders from the intelligence agency, just so she could pursue the person with the rose tattoo that she's been single-handily searching for.
However, the ringleader has already escaped to another place. "The tattoo is proof of a traditional ability. If that person has the same fighting method then means..."
She is placed on house arrest, completing her sentence more than a month later.
"It won't be easy to break away the brainwashing. But I know I can do it. Until the day my mother returns."

The battle has ended for now. Sharon stood still, as a man of unmeasurable value lied at the far end of the stretched scene.
"There's no turning back now. I..."

Sharon commands, "I need more information. I need to know the truth!" Suddenly Sharon hears a voice behind her, "You look alike your mother..." As Sharon turns to face the strange voice, she feels an acute pain on the back of her head. As he faints she whispers "You are..."

Sharon, alongside Vulcano Rosso, Area and Pullum Purna, appears as one of the DLC characters in Fighting EX Layer. The game's story expand her origin, and connection with Shadowgeist.

Sharon was first seen in the last part of the EVO 2018 trailer. Sharon was last seen in the next teaser between the schedules of November and December preparing her bullets from her handgun before shooting it. She was seen in her gameplay fighting Kairi during the teaser of the 2019 schedules. She and the guest character Terry Bogard will be added as a DLC character in the update 1.2 as both of them gained their debut trailers and their showcase of gameplay. They became playable on March 26, 2019.

Sharon had taken aback her time with her lover. During her mission, She finally learns her real name is Seren, the long-lost daughter of Shadowgeist. Sharon decided to use her real name however, she stood next to her precious lover.

Sharon's fighting style is possibly military combat techniques due to her role as an A-Class agent and also using firearms.

Sharon's moves are damaging when she utilizes both her punches and kicks. She can knock her opponent by lunging them on the ground serving as one of her throws But in Fighting EX Layer, two of her lunges are replaced with two right jabs on her downed opponent. Her kicks are also shown to be damaging when she uses her Half Moon Kick or her basic attacks.

Sharon is the only known playable character in the EX series, and the Street Fighter series in general, to actually wield firearms (i.e., handgun and sniper rifle). She uses them as part of a special attack (specifically one of her Super Combos and her Meteor Combo). When executing one of her Super Combos or her Meteor Combo, it has a limiter in which she can only damage her opponent with just one shot. Sharon does not use her gun in the original Street Fighter EX2 (it only appears in one of her win poses), she started using it in Street Fighter EX2 Plus.

In Fighting EX Layer, her handgun resembles an M55 magnum where she quickly prepares her bullets from her handgun and to use it on her Super Combos. She retains all of her moves from the Street Fighter EX series and she is no longer using the Load Super Combo due to its limiter of her bullets appear on the bottom of the screen and like Ibuki, she can shot her magnum six times until it was emptied. She will reload her six bullets in another round. She has a purple hue when utilizing both her special attacks and Super Combos. Her Hellfire has two variations; one is a special attack that shoot her opponent in one hand similar to a projectile which can also deal one or two shots and the other being her actual Super Combo that deals heavy damage in one shot which glows in a bloody crimson. Her Sharon Special now have an additional kick making her damage three times before she ended with her Half Moon Kick. She also has a new fighting stance where she is ready to quick draw her handgun while being holstered during battles and a new grappling move where she hop and shoot her opponent's back with her magnum and lands a powerful kick.

Throughout the EX series as explained below, Sharon's Super Combos involves her to use firearms and she has the most Super Combos aside from her Meteor Combo with a total of four.

Her first Super Combo is Load where Sharon loads her handgun and a bullet symbol will show at the bottom of the screen. She is still able to attack normally and she is seen holding the pistol the entire time while utilizing both punches and kicks. Her second Super Combo is Hellfire where she fires a single shot of her handgun after using Load. In Fighting EX Layer, her Hellfire now has two variations as explained above. Her third Super Combo is the Shuttle Combination where Sharon thrusts her opponent in the air, and follows up with a series of blows before grabbing them mid-air and driving them to the ground face first. Her fourth Super Combo is the Sharon Special as Sharon performs a launching knee attack, and then juggles the opponent with a series of two kicks and ends with a Half Moon Kick. In Fighting EX Layer, it is now a series of three kicks while a quick pace. Her Meteor Combo is the Assault Rifle and like both Load and Hellfire Super Combos, Sharon will hit a single shot with her sniper rifle dealing massive damage on her opponent. 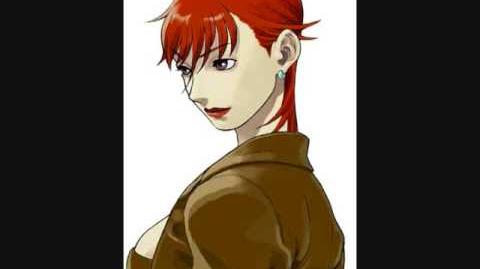