Shiba Shintaro (シバ・シンタロウ, Shiba Shintarō?) is a character from the multi-directional shooter game Cannon Spike. He is one of the eight playable characters and one of the two "original" characters in the game along with Simone. He is inspired by the character of Siva from Midnight Wanderers and Chariot, two of the three arcade games in Capcom's Three Wonders. Despite only being indirectly connected to the Street Fighter series, he was adapted into it's universe and given a profile in the Shadaloo C.R.I. character guide.[1]

Shiba is a cocky ex-skateboard World Champion. He despises evil since he was involved in a terrorist attack. Nowadays he collaborates with Delta Red and uses a hoverboard invented by George Ginzu. He's followed by a supporting robot named Akaby (アカビー, Akabī?), which can attack with flames spewed from its mouth. He also has a mysterious relationship with Nash. 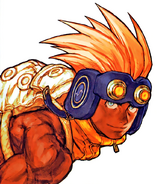 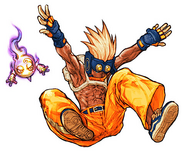 Akaby with its flames extinguished