Those who eat without proper manners, being touched

Much like Karin herself, Shibasaki first appeared in the Sakura Ganbaru! manga, and later made an appearance in Karin's ending and stage in Street Fighter Alpha 3.

Shibasaki is seen as a slicked black hair and fair complexion. Wearing a black suit and pink tie.

While concerned for Karin's welfare, especially in regards to her interest in street fighting, he is nonetheless in awe of her abilities as a martial artist and as the heir of the Kanzuki Zaibatsu.

According to Sakura Ganbaru!, he drives Karin to and from school, arranges her meals (as she won't eat school cafeteria food), does background research on anyone she takes interest in (even straying into unnecessary territory), and other odd jobs. Shibasaki is acquainted with Azam (having learned most of his skills from Azam's online butler teachings) and Ortho K. Gotch.[2] He is also a considerably skilled fighter.

In Street Fighter V, Shibasaki's function to Karin is to relay information about the Black Moons. 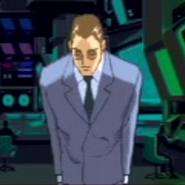 Shibazaki as he appears in Street Fighter Alpha 3 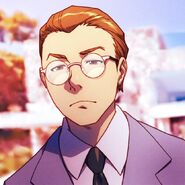 Shibasaki alongside Karin and Ibuki as they appear in A Shadow Falls. 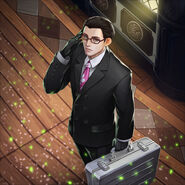