Gerald C. Rivers (Street Fighter V)
Shin-Bison, also known as True Bison as well as True Vega (トゥルーベガ, Turū Bega) in Japan, is a non-playable character from the Street Fighter series, first appearing in Street Fighter EX3 as the secret final boss. This is the form M. Bison takes whilst going all out and utilizing his full potential. He also reappears as the version of Bison fought in an Extra Battle campaign in Street Fighter V: Arcade Edition.

Shin-Bison is very much similar to regular M. Bison in terms of appearance, except with a different palette for his skin and outfit: his uniform is white with turquoise shoulder pads and anklets, and he has a zombie-like light purple skin tone. He is also physically larger than the normal Bison.

Shin-Bison can only be fought once the player has accumulated a high enough score, which can only be accomplished by means of acquiring numerous perfect victories and by winning matches using a Meteor Combo, Meteor Tag Combo, or a Critical Parade as often as possible. He is also unplayable, unless third party cheat devices are used, as he is quite unbalanced in terms of gameplay and even has an unlimited amount of energy in his meter.

In EX3, he is different from the regular Bison and Bison II in that his movements are faster and his attacks have less delay and recovery time and can be canceled/chained as if he was in a permanent Excel state (for example, his Double Knee Press can be immediately interrupted into a Psycho Crusher). Finally, he gains a new Meteor Combo similar to the Marvel vs. Capcom series incarnation of his Knee Press Nightmare.

In Street Fighter V: Arcade Edition, the "Shadaloo Apparition" version of Bison has a special CPU-only V-Trigger that is permanently active and completely changes his moveset from the regular Bison and even Phantom Bison. He now has the Psycho Crusher, normally only available during his V-Trigger II Psycho Nightmare, as a regular move, can cancel and link normals that he normally cannot into specials and even his super, he gets the EX version of his Psycho Blast as a regular move, and his Bison Warp can now go through his enemy, which is normally only possible during his V-Trigger I Psycho Power.

Shin-Bison performing the Psycho Cannon B on Sharon.

Shin-Bison during his win pose. 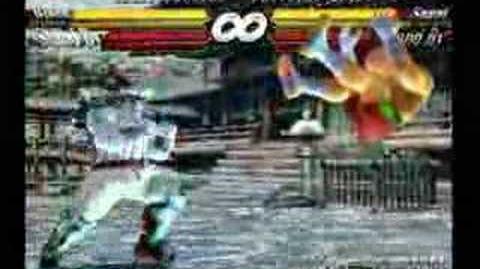