The attack itself is the manifestation of its namesake, the "true" technique of the Shoryuken. The user strikes the opponent very hard in the midsection (via elbow or punch), and then performs a high-damage Shoryuken. This requires the utmost focus and temperament to perform correctly. If the user misses the initial midsection attack, however, they will perform a Shoryuken which has multiple hits and acts as a failsafe; it is capable of hitting the opponent should they jump away to avoid the attack.

Ryu punches the foe in the midsection with a standing uppercut, and if it connects without Ryu leaving the ground, he follows with a second uppercut and finishes with a Shoryuken. If it is done with Ryu facing any side of the wall up close, Ryu will fall back a bit to allow room for his opponent to fall down from the attack.

In New Generation the Shoryuken hits once, for 3 hits in total. In 2nd Impact and 3rd Strike, a second strike was added to the final Shoryuken, making 4 hits in total.

Ryu strikes the foe's midsection with his leading elbow, uppercuts the foe with his opposite hand, and then performs a powerful Shoryuken with the leading hand.

The move has the same command as the Metsu Shoryuken; the difference between the two is the distance from the opponent and/or the later frames of the attack, with the Shin Shoryuken requiring Ryu to hit the opponent at the last frame of the elbow lunge. The move does great damage, but is practically impossible to use in battle, though it can be visually disguised by if Ryu is facing toward or away from the screen during the final hit.

Gouken's version is the same as Ryu's from Street Fighter III, indicating that he taught Ryu the move. When performing the move, Gouken performs a powerful uppercut; upon landing the initial attack, he delivers a powerful alternate-handed uppercut to the opponent's jaw as he performs the final Shoryuken, sending them skyward.

While Gouken's Shin Shoryuken already does considerable damage, it should be noted that it deals significantly more damage when used by Gouken as a boss in the Arcade Mode; it is enough to deal roughly two thirds of the average fighter's health bar, requiring the player to respect the threat of the move which can completely swing a seemingly advantageous fight.

The move appears in the game as Ryu's EX Shoryuken, and is similar to its Street Fighter III incarnation. However, the finishing Shoryuken hits only once, instead of twice.

On June 28, 2018 a new Extra Battle opponent was added to the game. The fight, titled "A True Martial Artist" pitted the player against a powered-up Ryu (named THE MASTER, in-match); wielding a devastating Shin Shoryuken as his second Critical Art.

The move is performed similarly to its Street Fighter III incarnation with a small cosmetic difference. In every game of the series prior Marvel vs. Capcom 3, the move electrocutes the opponent upon connecting successfully. In Ultimate Marvel vs. Capcom 3, it has the benefit of being able to go into its full animation as it connects if it doesn't go over half the screen. In Marvel vs. Capcom: Infinite, when Ryu has less than 25% of his health remaining, and he performs this attack, when the opponent is hit, its new cinematic animation is similar to a scene during Ryu's final fight against Necalli in Street Fighter V, in which his eyes and body glow in a red aura, signifying the Satsui no Hado about to take over, and then getting replaced by a blue aura, signifying Ryu tapping into the Power of Nothingness, before finishing the attack; it also references Ryu's first fight with Sagat in the original Street Fighter, in which he lost control and wound up scarring Sagat with a Metsu Shoryuken.

The move remains mostly the same, although Ryu rears back further during the startup in both Capcom vs. SNK and Capcom vs. SNK 2, and the move finishes with the same "spiral" as a regular Shoryuken.

In The Match of the Millennium, it appears as Ryu's unlockable Super Combo and it is visually identical to the Street Fighter Alpha 3 version, except that he always performs the full move regardless of his distance from his opponent.

The move appears in the game as Ryu's EX Shoryuken, and is visually similar to its Street Fighter III incarnation.

In this game it allows Ryu to get a safe raw tag on hit. On block it provides enough blockstun due to multihits to Switch Cancel. Care has to be taken for Ryu to not be punished afterwards.

On hit this attack provides a good amount of hit animation for the partner.

Super Smash Bros. for Nintendo 3DS and Wii U[]

Ryu uses the Shin Shoryuken as his Final Smash if he is close to any of his opponents; otherwise, Ryu will use the Shinku Hadoken instead.

For the Shin Shoryuken, it is important to combo into the move (usually with Up Tilt) in order for the move to be guaranteed due to its poor horizontal range; however, as a tradeoff, it deals much more damage than the Shinku Hadoken, as well as KO'ing more reliably; Ryu has combos into Shin Shoryuken (usually started by his Down Aerial or Focus Attack) that can KO any character in the game from 0% damage.

Also worth noting is that the Shin Shoryuken can miss; in this case, Ryu performs a 6-hit Shoryuken that deals much less damage and has a very hard time finishing off opponents (in essence, a weak Forbidden Shoryuken). As with most Final Smashes, the move ignores all shields, counters and Armor, and Ryu is completely invincible (including to grabs) for the entire duration of the move. If the move has enough power to K.O an opponent, the background lights up in the same way that it does when defeating an opponent with a Super Combo in the Street Fighter series.

In the game, Ryu can Super Cancel into the Shin Shoryuken.

A most powerful attack to Ansatsuken users, it is utterly tide turning and potentially match ending at an instant, but only at the right conditions and is often gauge heavy in consumption, therefore it is best if reserved as an ace and trump attack.

Generally, if timed incorrectly and/or the opponent blocks/avoids the attack completely, the opponent can easily punish the user; the after-lag for the resulting "Forbidden Shoryuken" is higher than that of the HP Shoryuken used by Ryu, Ken, and Akuma.

In the Street Fighter III games, Shin Shoryuken only has a single stock, however the Super Combo Gauge is extremely large, with slightly more than enough to allow 3 EX Specials from a full gauge. However, this means that the Super meter needs to be conserved for a long time before the Shin Shoryuken is ready to unleash.

In the Street Fighter IV games, Gouken is able to fully use this Ultra Combo flexibly, as it has Armor Breaking properties and a very good horizontal range. It is easily utilized in juggles and - with a full Revenge Gauge - does around half a health bar's worth of damage. Most infamously, Gouken can combo into it from his back throw, though this is balanced out by its longer than average startup and tech window. As a boss, Gouken's Shin Shoryuken has a quicker startup and much greater priority, in addition to doing much more damage.

An easy method of pulling off a combo with the Shin Shoryuken is to use a standing heavy kick up close, which will propel Ryu back enough to combo into the move using the full animation; the timing, however, is crucial.

In most crossover games, such as Tatsunoko vs. Capcom, it is possible to create an opportunity to juggle the falling opponent, based on the varying height levels the opponent was launched at and the varying times for when the user recovers.

The Shin Shoryuken first appeared in 1996's Street Fighter Alpha manga by Masahiko Nakahira, where Ryu used it in his final fight against Bison.

The move is simply a very powerful Shoryuken delivered to the opponent's face, lacking the first two strikes seen in later video game depictions. The attack also has electric-like effects, similar to its appearance in the early Marvel vs. Capcom games, as well as Tatsunoko vs. Capcom. Additionally, the pages showing the move have the same kanji used for the move in the games (真・昇龍拳).

The Shin Shoryuken in the manga.

Shin Shoryuken in Marvel vs. Capcom

Another screenshot from the same game. (PSX)

Shin Shoryuken in Capcom vs. SNK

The Shin Shoryuken in Street Fighter EX 2 Plus

The Shin Shoryuken in Marvel vs. Capcom 3: Fate of Two Worlds 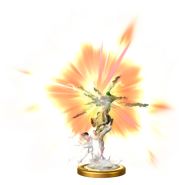 Trophy of Shin Shoryuken in the Wii U version of Super Smash Bros. for Nintendo 3DS and Wii U.