Executed by performing two quarter-circle forward motions and pressing all three punch buttons, Dan dashes towards the opponent. If he misses or is blocked, he will trip and roll along the floor.

If not blocked, the camera shifts to a cinematic angle, and a drumroll as punches his opponent in the face, proceeding to launch a barrage of blows; a gong sounds as he finishes with a Koryuken for an 8-hit combo. As he lands, he performs his trademark pose: smiling broadly at the "camera" with a sparkling sound effect (of his teeth glowing white), giving a thumbs up gesture and sticking his rear end out.

Unlike the Hissho Buraiken, the attack has a wide range (about the length of Dan's heavy punch Gadoken) and will miss if performed at any distance farther than that, or if the opponent has almost hit the ground (during a Focus Attack crumple, Dan can still connect if his opponent's torso is a centimeter from hitting the ground, though the timing is tricky if done from a back dash).

As with most Ultra Combos, the move is a good punisher, and can also pass through projectiles with proper timing, as Dan is temporarily invincible during the forward rush.

It is also important to note that missing the attack will leave Dan open for a considerable amount of time, leaving him vulnerable. In Ultra Street Fighter IV, the move gains Armor Breaking properties, allowing a player to punish Focus Attacks with it.

Dan finishes the attack with his trademark smile.

Dan hits her back. 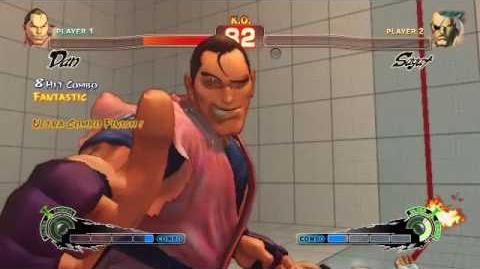