Chun-Li went to the crowded shopping district to investigate a possible drug route and ended in a street fight.[1] To the left there is a shop selling drinks, with two Coca-Cola crates visible in the back. Near it is the Xiamen Meat Company (廈門肉食公司, Xiamen Meat Company?), where a vendor from Xiamen sells meat. The meat is hanged on the ceiling and a man is holding a chicken while watching the fight. The sign near the meat shop warns to not spit. To the right is the Shanghai Salon (上海发廊, Shanghai Salon?). Between the meat company and the salon is a man with a crate of either fruits (水菓, fruits?) or ice (冰, ice?), depending on the version, that appears to be a disguised Monitor Cyborg.[2] Bicyclists often speed up by the street.

Despite being named Taiping Road, the stage appears to be based on Chun Yeung Street, which contains a real Xiamen Meat Company.[3] 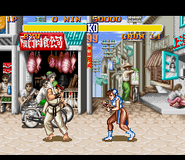 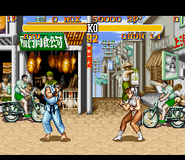 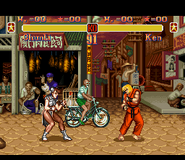 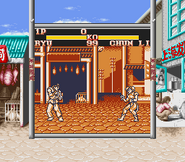