"You must defeat my Shoryuken to stand a chance."
—Ryu, Super Street Fighter IV

The Shoryuken (昇龍拳, Shōryūken?, "Rising Dragon Fist"), commonly referred to as the Dragon Punch, is a special attack in the Street Fighter series used by Ryu, Ken, and other Street Fighter characters that use the same style.

It was introduced in the original Street Fighter as one of Ryu's three special attacks at the time, the other two being his Hadoken and Tatsumaki Senpukyaku.

Executed by moving the stick forward, down, and then down-forward (commonly referred to as a "Shoryuken motion" or a "DP Motion), the move is a jumping uppercut in which the user spins upwards with some horizontal movement as well, knocking the opponent to the ground and inflicting damage.

The Shoryuken is primarily used as an anti-air move. However, with some practice, it is possible to use it to counterattack almost any move. The trade-off for this is that the user is completely vulnerable to attack as they fall back to the ground, and for a split second after landing.

If the Shoryuken connects with the opponent at the deepest point of impact (i.e. while the user is still standing on the ground), it will inflict substantially more damage. Experienced players will often wait until the last possible moment before using the move as counter, even against air attacks.

In the Street Fighter II series, the Shoryuken is almost completely invincible while rising, meaning it can pass through projectile attacks, potentially striking the recipient in the act of throwing them. In later games in the series, this invincibility is mostly removed; however, the Shoryuken still has a massive hitbox, and will often beat out most other attacks.

Ryu focused on making his Shoryuken hard-hitting, usually hitting in one blow and knocking the opponent on his back. Though a little weaker and with slightly less range than Ken's, it makes up for this with better recovery time.

In Street Fighter Alpha, Ryu began using the Shin Shoryuken. The Metsu Shoryuken, which Ryu scarred Sagat with, appears in SFA as well. It is visually similar to the Shin Shoryuken minus the second uppercut, and is right-handed instead.

It is possible for Ryu to use the other variants of Shoryuken available to Ken and Akuma in Marvel vs. Capcom: Clash of Super Heroes via Mode Change.

Ken prefers to use the Shoryuken to finish opponents, as it is a stylish and graceful way to win the match, and has different powerful variants as a result. Ken has focused on this move in order to distinguish himself from his training partner (fitting that Ryu surpasses him with the Hadoken).

In most games, Ken's Shoryuken also covers a lot of horizontal distance, at the cost of a longer recovery time, leaving him open for counter-attack if he misses or is blocked. Starting with Super Street Fighter II: The New Challengers, his fierce version also causes his opponent to burn when hit, this being born from the individualism he sought (the storyline explanation being shifting ki into his fist during the uppercut in order to channel a fire elemental).

Of note is that in the Marvel vs. Capcom series, Ken and Sakura are the only ones capable of performing a Shoryuken/uppercut in midair.

Akuma has a Shoryuken that strikes hard and can score multiple hits, like Ken's (though Akuma's fist doesn't become engulfed in flames), and has the range and overall function property of Ryu. Instead of crouching, however, Akuma launches differently; he directly hits them in the chest then in the chin, then he jumps up and hits them with the flying uppercut. This property makes the attack quick and hard to block. This property disappears when Akuma becomes Oni.

Akuma's cybernetically enhanced form, featured only in the crossover, Marvel Super Heroes vs. Street Fighter has much stronger variations of the Shoryuken in comparison to his former self. His basic Shoryuken, dubbed the Shining Circuit Shoryuken can connect up to 10 times up close and setup the opponent for a juggle. Cyber Akuma has his own variation of the Messatsu-Goshoryu, dubbed the Scramble Gou Punch. It surpasses the Messatsu-Goshoryu every way conceivable.

Akuma's Goshoryuken became stronger when he became Oni, and it bears resemblance to the Shin Shoryuken. The first uppercut will hit the opponent in the midsection, while the jumping uppercut to the chin is performed with the other fist. It deals out 3 hits and good damage, although if the uppercut whiffs it, will turn into a regular Goshoryuken that can catch airborne opponents for less damage. The other trade off is that it doesn't go far horizontally. Oni's second Ultra Combo in the Street Fighter IV series, the Tenchi Sokaigen concludes with a Goshoryuken to the spine of the airborne opponent.

Gouken does not have the Shoryuken in his standard moveset, unlike his disciples, Ryu and Ken; his only Shoryuken variants are his Super Combo and first Ultra Combo.

Sakura developed her own variation of the Shoryuken, the Shouoken, in which she runs at her opponent and finishes with an uppercut. Her Shoryureppa-inspired combo Midare Zakura is three of these Shouokens back to back.

As he has not completed his training with Ken as of Street Fighter III: 3rd Strike, Sean's version of the Shoryuken is incomplete. His Dragon Smash involves him jumping like a Shoryuken, and throwing both fists into the air simultaneously. He does a proper Shoryuken as part of one of his Super Arts.

Dan uses his own version of the Shoryuken, the Koryuken. It is possible that he learned this move during his brief training under Gouken. Dan also has a super move similar to the Shoryureppa, the Koryu Rekka. It tends to have less of a horizontal hitbox compared to Ryu and Ken's in games and doesn't move him forward as much (though this varies from game to game).

Since Seth can mimic the techniques of other fighters, he has developed his own modified version of the Shoryuken. His unique Shoryuken can be performed multiple times in midair if the initial Shoryuken hits (the motions must be repeated). Using both arms to launch two Shoryukens in rapid succession then finally ending with a spinning Shoryuken that looks somewhat similar to a flame-less Shinryuken.

Kage's Shoryuken acts similarly to Akuma's. He can hit his opponent 1-3 times, depending on which punch button is pressed. The range of this attack is also determined by the strength of the punch button pressed. The EX version requires pressing two punch buttons, but is treated similarly as Shoryureppa. Like other users before him, Shoryuken is used to end combos to inflict optimal damage. Kage can use Kurekijin to put his opponent in a juggle state, allowing him to follow up with Shoryuken of the same or less intensity. 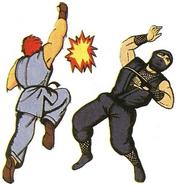 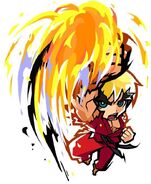 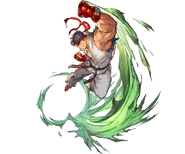 Seth's Shoryuken from the same game

Kage's Light, Medium, Heavy, and EX Shoryuken.
Add a photo to this gallery

The move has been the subject of a very famous rumor and hoax revolving around Ryu's mistranslated quote, "You must defeat Sheng Long to stand a chance". Sheng Long would later become one of the most well known legends in video game history. As for the Shoryuken itself, it has since been referenced in various forms of media.

Many attacks of characters work by similar concepts to the Shoryuken in either knocking the opponent into the sky or being the invincible reversal of said user (sometimes both). Attacks of this class involve Tiger Uppercut, Kazekiri, Cannon Spike, and Jet Upper. Some follow Ryu's example in being a stronger 1 hit attack or Ken's in being a multi hitting attack that adds up damage over hits.

Retrieved from "https://streetfighter.fandom.com/wiki/Shoryuken?oldid=231976"
Community content is available under CC-BY-SA unless otherwise noted.