"The Raging Demon... Its power is unequaled... It is not my fist but your past sins that will kill you... The more evil your past doings, the more painful your death..."
—Akuma to M. Bison in Street Fighter Alpha 3

The Shun Goku Satsu (瞬獄殺, Shun Goku Satsu?, "Instant Prison Murder"), usually translated as the Raging Demon, is a Super Combo commonly seen in the Street Fighter games. It is one of the most powerful attacks throughout the franchise, succeeded from Ansatsuken's signature techniques.

Super Street Fighter II Turbo featured the first appearance of this attack; Akuma's introduction has him perform the attack on Bison just as he is about to face the player; the Shun Goku Satsu becomes Akuma's Super Combo in later versions of the game. The move first becomes usable in the Street Fighter Alpha series.

The move is typically executed by pressing light punch twice, forward, light kick and then heavy punch in quick succession. In Super Street Fighter II Turbo Revival, any kick button can be used in place of the light kick. The last three inputs (forward, light kick, and heavy punch) can be pressed at the same time.

The user glides towards the opponent and grabs them. Suddenly, the screen blacks or whites out as the target is relentlessly beaten, as showcased by a series of flashes.

In addition, Ryu has been able to use it as well when he is fully under the influence of the Satsui no Hado. Several other users have emerged over the years, and the move's popularity has caused it to be referenced in several other forms of media within and outside the series.

The Street Fighter IV games introduce another, more powerful variant of the Shun Goku Satsu as Akuma's first Ultra Combo. It has been "given" most of the original attack's properties: the Wrath of the Raging Demon possesses startup invincibility that is also common with Ultra Combos, and deals several more hits and extremely high damage in comparison.

For the first time, the Street Fighter V games uncovered what was previously concealed by the black screen of the Shun Goku Satsu; the attack was revealed to be a series of progressively faster teleport punches around the opponent's body until it progressively goes fully blank screens again. When slowed down, the punches in particular are shown to be targeting vital weak spots located throughout the body, solidifying that the technique utterly destroys the opponent's body. To use the Shun Goku Satsu, Akuma must first use his V-Trigger, Dohatsu Shoten, while Kage must use Rikudo Osatsu.

The differences between Akuma and Kage are the screens, whereas Akuma’s only have black screen and has the light flashing for temporary when punching his opponents, while Kage’s only flashes during the starting punches before the screen goes blood red while the characters goes censored black like silhouettes permanently until the end of its moves.

In earlier installments, the Shun Goku Satsu usually can be comboed into a standing jab or a standing roundhouse, as well as cancelling a slower move, in order to take advantage of the opponent being hitstunned long enough from the prior attacks, but only if the inputs were done fast enough. Like most high-powered moves in the Street Fighter IV, Focus Attacks can also provide an opening. Despite its power, however, characters can escape with longer-ranged moves, due to the actual grab being close-range. It can also be countered with as little as a quick jab or, punished with a retreating jump attack.

For Akuma players, a well-placed Zanku Hadoken can give the user enough time to input it while the opponent is defenseless. Another common way to guarantee it to connect is to use it on an opponent waking up from a knockdown, though the Akuma player must be wary of any full-level invincibility moves used to counter it, or anything with throw-invincibility.

Starting with the Street Fighter III series, a popular strategy uses a "kara" (void) throw-type of whiff to extend the move's range, or to bait the opponent into a frame trap of some sort. The Shun Goku Satsu is often used in a similar fashion to that of most command grabs, being a powerful close-ranged grab that usually cannot be jumped out of on reaction to the screen-freeze. Its input can be hidden within various other moves, and some can even be cancelled into the Shun Goku Satsu, such as Akuma and Evil Ryu's overheads. With enough practice, it can be hidden within forward dashes and whiffed buttons, making them almost completely unreactable. On top of this, the Shun Goku Satsu's instant startup means that it can punish attacks that would otherwise be considered safe. Through utilization of its multiple paths and setups, the opponent can be pressured to avoid taking any action out of fear of being hit by the Shun Goku Satsu.

In the storyline, the Shun Goku Satsu is a very powerful, but dangerous, technique taught in the original principles of Ansatsuken by Goutetsu. When performed, the user of the Satsui no Hado would hand themselves over entirely to the killing intent, launching a series of deadly strikes in a moment. Historically, those that had used this technique had been unable to resist the potency of the Satsui no Hado and were consumed by it, their minds reduced to that of violent, demon-like berserkers (such as Evil Ryu and Oni). Goutetsu was the only known person who could somehow use this technique without failing into the darker aspects of the Satsui no Hado.

While the executed attack is a brutal onslaught of merciless fury, the basis of the attack is said to be linked to karmic forces drawn from the influence of the Satsui no Hado, channeling an infernal punishment in which the weight of sins and evil the victim has committed attacks their soul. While immensely powerful, this attack cannot work on artificial life forms or people who lack souls. There is only one method known to perfectly counter this attack that some characters have survived its wrath, being the Power of Emptiness or Mu.

To date, only two fighters have been shown to defend against the Shun Goku Satsu, and one instance of being able to fend the entire attack off.

However, there are notable victims who somehow have survived this attack.

The concept of the Shun Goku Satsu (and Satsui no Hado itself) seems also heavily inspired by the concept of Matoki no Aura from the Fist of the North Star manga series. Furthermore, the attack seems specifically inspired by the star technique called Hokuto Manju Maon Ken (North Star Thousand Hand Demon Sound Fist). The technique involves countless strikes in the blink of an eye and is fueled by the user's evil fighting aura, making the Shun Goku Satsu share many similarities with it. This is the version that is used in the manga Street Fighter III: Ryu Final, where Akuma's Shun Goku Satsu is visually identical to Manju Maon Ken.

In addition, the appearance of the "heaven" kanji, characteristically associated with its user Akuma, and how the move's style is that of assassination, is likely a reference to the Japanese word tenchu, meaning "heavenly retribution", which was a popular memento written on paper by assassins to their victims and associates in Feudal and turbulent eras of Japan. This concept is referenced by Ciel when Zero faces off against Akuma in SNK vs. Capcom: SVC Chaos, describing Akuma as if he is an actual assassin.

In Akuma's ending in Street Fighter IV, the Shun Goku Satsu is shown as a mighty punch enveloped in crimson energy. The Street Fighter US animated series predated and used this exact depiction, though the energy was violet-colored.

It's first animated appearance was in the episode, "The World's Greatest Warrior". Akuma used this move on Gouken after he was inquired by him on why he decided to make a return after so long. Akuma replies by stating that he had learned the ultimate move of their art, in which Gouken says, "Not...the Raging Demon?", to which Akuma stands up and replies, "Yes!", and uses it on Gouken at point-blank range. Later, during Ken's battle with Akuma, Akuma threatens to use the Shun Goku Satsu on Ken himself, but is thwarted before he can pull it off.

It makes its first ever CG appearance as well in Steve Fox and Hwoarang's ending of Street Fighter X Tekken; the latter brags that he could have easily beaten one hundred opponents without breaking a sweat, and Pandora grants this by summoning one hundred Akumas, all of whom perform the Shun Goku Satsu at once.

The move made its second CG appearance in Asura's Wrath DLC, Lost Episode 1: At Last, Someone Angrier Than Me; Evil Ryu and Asura used it on each other, but both are seen standing after the successful quick-time event, inferring the conclusion that the moves canceled each other blow for blow. In Lost Episode 2: The Strongest vs. The Angriest, Oni attempts to use the Shun Goku Satsu, but is interrupted and countered, resulting in Oni flying into the air.

The move makes its first cinematic appearance in Episode 9 of Street Fighter: Assassin's Fist when Akuma uses it to kill his master, Goutetsu. As the latter charges up an extremely powerful Metsu Hadoken, Akuma engulfs himself in a mass of red flames, zooming at high speed towards Goutetsu and passing through the Hadoken. Little of the move is seen, though as Goutetsu is grabbed, a bright flash can be seen, right before the shot changes and a harrowing scream can be heard echoing along with the familiar screech. As Akuma stands over his fallen master, the kanji for "heaven" (天, ten) can be seen not only burning bright on his back but also in the thundery clouds above.

Street Fighter V revealed that the attack consists of a series of teleport punches that start out slow, but get progressively faster as the attack goes on, and targets vital weak spots of the body, which brutally, or even fatally, injures the opponent.

The Shun Goku Satsu performed by Akuma in the animated series.

Akuma glides toward his opponent during Shun Goku Satsu.

Akuma posing with kanji for "godlike person" (神人 shinjin) burning bright on his back after delivering the Shun Goku Satsu. 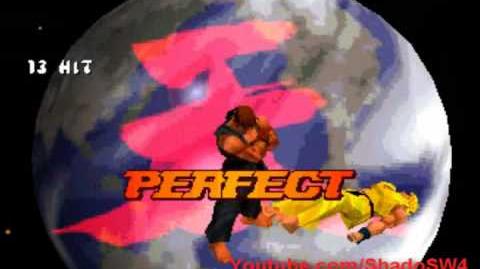