The Siberian Blizzard (シベリアンブリザード, Shiberian Burizaado?) is one of Mech-Zangief's Hyper Combos in the Marvel vs. Capcom series and Zangief's second Ultra Combo in Super Street Fighter IV.

Executed by performing two full circle motions in either direction and pressing all three kick buttons in mid-air, Zangief jumps in the air and starts to spin rapidly with his arms outstretched - essentially performing an airborne version of his Double Lariat - in an attempt to grab an airborne opponent. If successful, Zangief grabs them and puts them in a headlock, spinning them higher up in the air. He then puts them into a reverse-crucifix clutch and drives them head-first into the ground. After that, he jumps to the side.

Though the Siberian Blizzard only works against airborne opponents, it has very high priority due to is deceivingly good hitbox. From there, it is guaranteed to grab them no matter how slightly off the ground they are. As a result, the Siberian Blizzard can be used rather well to counter-act backdashes and certain special attacks, especially other grabs. 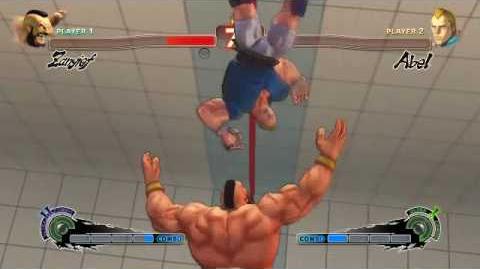