The Siberian Express is one of Zangief's special attacks, introduced in Street Fighter V.

Executed by performing a half-circle back motion and pressing kick, Zangief opens his arms out wide and charges toward his opponent. If he is close to his opponent, he wraps his arms around their waist and uses his momentum to jump forward, hoisting his opponent's stomach onto his shoulder. At the peak of his jump, Zangief somersaults forward, causing him to flip over his opponent. As they both flip in the air, Zangief puts his opponent into a reverse-crucifix clutch, hooking each of his opponent’s legs in one of his arms, while pressing his feet against their arms. Finally, Zangief drives his opponent head-first into the ground.

This move replaces the Flying Power Bomb from earlier titles as Zangief's forward moving command throw. The strength of the kick button determines the move's startup and damage. The Light version has the quickest startup, but inflicts the least amount of damage. The Heavy version does more damage, but has the slowest startup. The EX version does the most damage and has a quicker startup than the Light version. Additionally, it give Zangief 1 hit of armor.

This move helps Zangief by allowing him to catch people just out of the range of his Spinning Piledriver. He can often catch his opponent by jabbing into a range that they don't expect Zangief to use Spinning Piledriver, and then surprise them by throwing out his Siberian Express. It also catches opponents that back dash, which is one of the ways to avoid Zangief's Spinning Piledriver. The Siberian Express will have Zangief move toward the retreating opponent and still be in position to inflict massive damage. In additiona, the EX version can catch opponents that try to stuff Zangief's moves because of it has 1 hit of armor. The EX can even run straight through fireballs making it great against zoners in mid-range.

This is an easy special cancel tick throw with the added benefit of catching V-Reversal attempts. 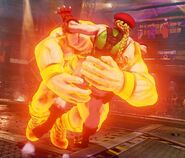 Zangief setting up Cammy for his Siberian Express.