Side Arm is Cody's first V-Trigger in Street Fighter V.

Executed by pressing Heavy Punch and Heavy Kick simultaneously, Cody reaches behind his back and pulls out a knife to use against his opponent. While this V-Trigger is active, Cody gains access to several new attacks with the knife. If his entire V-Gauge is consumed, Cody still keeps his weapon. Performing another attack that involves the knife after his V-Meter has been depleted causes him to lose his weapon. Additionally, Cody cannot perform Tornado Sweep while he is holding the knife.

Cody's punch attacks are also significantly changed. While the startup frames of his punch normals are slightly increased, they inflict more damage and have longer reach. His punch attacks also have better frame advantage on hit and on block. Each standing, crouching, and jumping punch normal involve some kind of attack with the knife; including some post-attack animations.

In addition to the buffs to his punch normals, Cody can also perform additional attack while this V-Trigger is active or while he has the knife.

Burst Shot is executed by pressing Medium Punch, followed by Heavy Punch while holding the knife. Cody delivers a lunge to his opponent's stomach. If the first hit connects, he delivers an upward thrust to the neck region. This is Cody's only target combo that's exclusive to his first V-Trigger. Like most target combos, it is very unsafe on block. However, Cody can cancel the second hit of Burst Shot into his special attacks or Critical Art. If Cody's V-Gauge is depleted, then he cannot perform this target combo since the first attack causes him to drop the knife.

Snipe Shot is executed by pressing Heavy Punch and Heavy Kick simultaneously while holding the knife. Cody throws his knife straight at his opponent, similar to his Knife Throw. Because he cannot perform Tornado Sweep while he has the knife, Snipe Shot becomes Cody's long-range attack. Not only it has a faster startup than Tornado Sweep, but it also inflicts slightly more damage. It also travels fast across the full length of the screen. However, the knife has a hurtbox, similar to Ibuki's Kunai. If timed properly, his opponent can hit Cody's projectile in the air without taking any damage.

Additionally, this moves has better frame advantage than Tornado Sweep. It is +3 on block. At point-blank range, he can maintain pressure with normals or break through their defenses with throws. Hitting the opponent with Snipe Shot puts the opponent in a juggle state, allowing Cody to continue the combo with Hammer Kick or Ruffian Kick. While using this move causes him to lose the weapon, Cody can cancel into Reload to quickly equip himself with another knife. 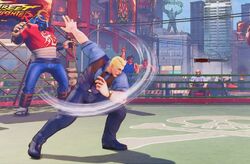 Anti-Air Snipe Shot is executed by pressing down, plus Heavy Punch and Heavy Kick simultaneously while holding the knife. Cody throws the knife upward at a 45° angle. As the name suggests, this is an anti-air attack. Because of the range and angle, Cody can interrupt his opponent's jump-in attempts from afar. It also puts them in a juggle state on hit, allowing him to follow up with another attack. While he is holding the knife, Cody cannot perform Tornado Sweep.

In addition, using Anti-Air Snipe Shot causes him to lose his weapon. By canceling it into Reload, Cody can equip himself with another knife. This move comes out slightly faster than the ground Snipe Shot. It also inflicts similar damage and stun. However, Anti-Air Snipe Shot is +0 on block. At point-blank range, his opponent can challenge or potentially trade with a 3-frame normal. 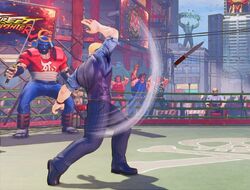 Reload is executed by pressing Heavy Punch and Heavy Kick simultaneously without the knife. Cody reaches behind his back and pulls out another knife. This gives him an additional opportunity to utilize the exclusive attacks and buffs that come while using the knife. While performing this move costs about 1/3 of V-Meter, it is important to get as much rewards as possible that comes with this V-Trigger.

Rapid Fire is executed by performing a quarter-circle back motion and pressing punch. Cody transitions to a reverse grip with his knife and delivers a forehand slash across his opponent's body. If the first attack hits, he follows up with six additional, rapid slashes to his opponent with the final hit resulting in a knockdown. This move is +3 on block. It is Cody's most damaging attack with the knife that can be cancelled into his Critical Art. By ending combos with Rapid Fire, Cody can inflict optimal damage at the cost of almost half of his V-Gauge.

Cody's Standing Light, Medium, and Heavy Punch with the knife.

Cody's Crouching Light, Medium, and Heavy Punch with the knife.

Cody's Jumping Light, Medium, and Heavy Punch with the knife.

Rapid Fire
Add a photo to this gallery
Retrieved from "https://streetfighter.fandom.com/wiki/Side_Arm?oldid=205444"
Community content is available under CC-BY-SA unless otherwise noted.