Skullomania's design was inspired by the Japanese superhero Kamen Rider created by the late manga author Shotaro Ishinomori, with extra elements drawn from the Skull Man, a character from a manga Ishinomori wrote in order to work out the concepts for Kamen Rider. Skullomania also draws from real-life luchador La Parka (also known as The Reaper/Death).

In Street Fighter EX, Skullomania's costume is simply a black body stocking with a skeleton motif printed on it. The Kamen Rider/"Skull Rider" image was enhanced in Street Fighter EX2, where Skullomania's costume gained a red scarf, gloves, and boots, as well as a belt almost identical to the Typhoon belt worn by Hayato Ichimonji, Kamen Rider #2. Both the belt and the forehead of Skullo's mask bear a stylized letter "S".

In his Shadaloo C.R.I. profile art, his gloves and boots are white, he no longer wears a belt and a gun holster on his right thigh and the "S" on his mask is orange instead of red.

In Fighting EX Layer, Skullomania remains largely the same in both of his appearances in Street Fighter EX and in his CFN profile. His gloves are now black with a skeleton motif and his boots became shorter. The boots are black and white to match his black body stocking with a skeleton motif. He no longer has the "S" on his mask but retains his red scarf from Street Fighter EX2.

As his regular self, his meek, simplistic outlook makes him nondescript. Once he dons his Skullomania persona, he becomes a heroic figure, despite the macabre motif, with a powerful sense of justice. One thing that survives both persona phasing is his somewhat campy sense of humor and showboating.

Skullomania opposes Shadaloo due to their evil plans.

He considers Shadowgeist a villain, due to his violent methods.

Skullomania regards Garuda as a villain to be stopped, due to his bloodlust.

Skullomania was once an average salesman called Saburo Nishikoyama. His superiors were not pleased with his results as a salesman. Down on his luck and constantly under pressure for results, he was forced to act in a hero show at the department store which employed him. During the performance, he felt an indescribable passion awaken within him, and decided to become a vigilante crime-fighter, swearing to protect the world from evil. As a result, he began to compete against top-ranked martial artists, fighting them on an even playing field.

In Skullomania's story mode in Street Fighter EX2, he sets out to defeat Garuda, whom he regards as a villain attempting to dominate the world. In his secret ending, Skullomania fights Shadowgeist, another vigilante with a different definition of justice. After defeating the vigilante, he exclaims; "I am Skullomania, the hero who fights for the sake of justice!!".

In Street Fighter EX2 Plus, it is revealed that Nishikoyama was promoted to the department manager at his job, but received a lot of criticism from his employees, who believe he was chosen to be a scapegoat. Whenever the stress of working gets too much for him to handle, he takes up the mantle of Skullomania and fights crime with an overwhelming sense of justice.

I shall continue the fight as long as evil persists! Whether it'll be on this planet or in outer space. For I am a hero! But being a hero isn't easy! Now that evil has been defeated for today, I must leave! Huh, it seems I cannot go back home yet. For the sake of my beloved wife, my children, and my pet Pochiro-kun. To the Greengrocer! Super Skullocrusher!

"I am a Hero!" As soon as Mania's perverted shout echoes across the city, his neighbor's annoyed housewife rushes madly to the Nishikoyama residence. "DO YOU HAVE ANY IDEA WHAT TIME IT IS?" "PLEASE CUT IT OUT!" Ect. Despite this, the Nishikoyama family is a happy family.

At last, Skullomania has cornered a true adversary. The final showdown has begun.
"Garuda, an arch-enemy who seeks world domination! The time has come to settle this! By the mark on this forehead, I will defeat you right now!"
"I can't read you... It seems that you're no ordinary human..."
"That's right! It would be an embarrassment to label me as an ordinary hero! For I am a superhero!"
Thus, a secret battle to protect the world was unfolding today.

Our aspiring hero has finally cornered his adversary Shadow thanks to his persistence. Shadow, who was fighting for the sake of his fellow countrymen oppressed by their government, was overpowered by Skullo, who fought with an overflowing sense of justice.
At the end, Skullo yell proudly at Shadow, who was lying on the ground.
"I am Skullomania, the hero who fights for the sake of justice!!"

"Hahaha, 'THE HERO IS ME!' or is it 'I AM THE HERO!'? Which sounds cooler? Hmmm..."
A hero never compromises, not even when it comes to choosing his victory phrase.

Skullomania prevented Shadaloo's attempt to conquer the world, but he realizes that there are still evil powers in the world. He knows that he must fight until the day evil is completely destroyed! Go and fight, Skullomania! Fight for our children! Fight for peace! Fight for the future! Everyone cheer for our superhero, Skullomania!!
NEXT WEEK: Episode 25, "Friend or Foe? Enter the Skullolady!"

Skullomania also made an appearance in the Japanese edition of the PlayStation 3D-based fighting game, Fighter Maker, even with some of his special moves intact.

Skullomania also appears in Komodo Crunchtime, a 2012 shooting game from Rie Studios, through a licensing agreement with Arika.

Skullomania appears as one of the playable characters in Fighting EX Layer, Arika's spiritual successor to the Street Fighter EX series.

After being promoted to a higher-level position at the department store he works at, Nishikoyama now lives a productive life as a salaryman. However, he has been troubled by the fact that he has been changing into his alter ego without any recollection of it happening. Nishikoyama's uneasiness causes him to given birth with new powers.

A gender-swapped version of Skullomania appears as one of the two DLC guest characters (the other being Thief Arthur from Square Enix’s Million Arthur series) in SNK Heroines: Tag Team Frenzy. Her reveal trailer is named "Friend or Foe? Enter the Skullolady!", which is a reference to Skullomania's ending in Street Fighter EX3.

This is part of the promotional collaboration of having SNK character Terry Bogard (who also appeared gender-swapped in SNK Heroines) appearing as a guest fighter in Fighting EX Layer.

Skullomania’s ending in Heroines has him wake up back safely to his home-world in his original male form from Kukri’s dream dimension. He awakes in the dressing room at his department store, where he is scheduled to act in the store's superhero live show. However, as he takes the stage, instead of the costumed villain character he was supposed to fight, a large crab-like monster attacks the show. Skullomania fights off the monster, sending it flying and winning the affection of the audience for saving the day.

Skullomania made a very small cameo appearance in the Street Fighter Legends: Sakura comic, riding on a bus in the background.

Skullomania has an acrobatic fighting style, possibly inspired by Freestyle Dance as one of his Super Combo shows him creating body blows from his slide kick and ends with a break dance maneuver.

Skullomania's moves involves his nickname as Skullo. His first move is the Skullo Slide where he could do a slide kick and Skull Crasher where he launches himself as a torpedo. From EX2 onwards, he can also use energy attacks. One of his throws has him to slide underneath his opponent and stomps them on the back.

In Street Fighter EX2 and onwards Skullomania became fast and agile, imitating double jumps and flips from Vega and M. Bison when he is about to attack his opponents. He gains a Skullo Dash which resembles Dudley's Jet Upper and a Skullo Dive imitating M. Bison's Devil Reverse. He is also able to perform tackles and backflips as his special attacks.

In Fighting EX Layer, Skullomania retains all of his moves from the Street Fighter EX series and his agility from Street Fighter EX2. He can perform spinning flips back and forth to avoid getting attacked and gains the ability to teleport to dodge his opponents' attacks, this allows him to make a counterstrike during that state. He also gains a new fighting stance.

Throughout the EX series, Skullomania's Super Combos involves his moves creating body blows on his opponent. His first Super Combo is a Super Skullo Crasher like his special attack, he launches himself like a torpedo but also as a drill to make multiple damage on his opponent. His second Super Combo is a Super Skullo Slide where he makes a slide kick to make a body blow on his opponent as the last blow goes for a break dance maneuver. In Street Fighter EX2 he gains his signature move the Skullo Dream. If it connects, Skullomania will set a barrage of blows which is increasingly comedic in execution as the last blow sends his opponent flying with a powerful uppercut while swearing the lines from his motto. This is his unblockable move that resembles Akuma's Shun Goku Satsu and Kairi's Kyoja Renbu. In Fighting EX Layer, this move now deals additional heavy damage and the lines from his motto had changed. 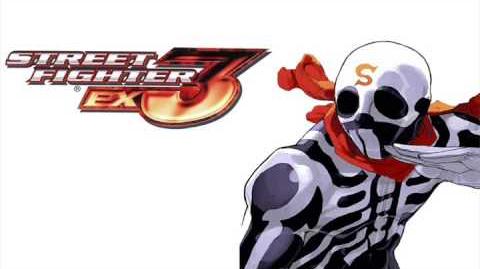