The Snake Strike (蛇突ネイチャー, Jatotsu Neichaa?, "Snake Thrust Nature") is one of Rufus's special attacks, introduced along with him in the Street Fighter IV series.

Executed by performing a Shoryuken motion? and pressing punch, Rufus leaps up into the air and releases a flurry of quick jabs.

The jump height and amount of blows are determined by the punch button pressed.

The EX Special version jumps higher and faster with a good horizontal distance, has limited startup invulnerability and deals more blows. In Omega Mode, Rufus performs the move basically on the ground, but can also use it while airborne (by jumping beforehand).

The EX version can be used as an anti air. Reaction times must be reasonably on point because the height where Rufus starts attacking is rather high.

The regular versions do not have the invincibility of the EX version so using them as an anti air is not recommended. The recommended use in Street Fighter IV is to use them after a successful aerial to aerial jumping hard kick.

In Street Fighter X Tekken EX Snake Strike's function is mostly the same. However the regular versions do more damage. The number of hits on the regular version depends on juggle points left but it does all hits if the move is immediately tag canceled.

In both games, the LP version can be used sparingly on wake-ups to catch neutral jumps and punish throw attempts. 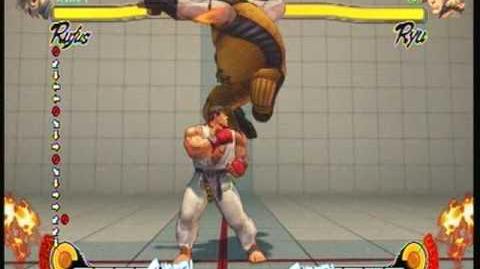 Street Fighter 4 Rufus - Snake Strike
A demonstration of each version of Snake Strike.
Add a photo to this gallery

Retrieved from "https://streetfighter.fandom.com/wiki/Snake_Strike?oldid=224503"
Community content is available under CC-BY-SA unless otherwise noted.