The Sorai Rengeki (槍雷連撃, Sourai Rengeki?, "Spear Thunder Chain Attack") is one of Yun's special attacks, introduced as his second Super Art in the Street Fighter III series. Yang could also use it prior to 2nd Impact.

Yun throws two elbow strikes, two lunging palm strikes, and then a high kick which knocks the opponent into the air.

Yun follows up with a Nishokyaku that follows the opponent into the air. He then finishes with double-hitting flying spin kicks which sends the opponent flying.

After following up with the elbow and palm strikes, Yun follows up even further with a hammering arm smash via leading hand, then a roundhouse turn kick to his opponent's face. He then from his flying kick leaps into the air and rides the flying opponent's back like a skateboard before performing a spinning handstand on them. He then rapidly launches a flurry of downward kicks, finishing with a powerful one which drives the opponent face-first into the ground.

If the attack is performed while Genei Jin is active, Yun performs the combo as he does in the SFIII version, which does less damage as it prevents the cinematic from playing.

An example of the Off-Camera secret

Poison seemingly gets launched down differently than the rest of the cast.

The best for last.
Add a photo to this gallery 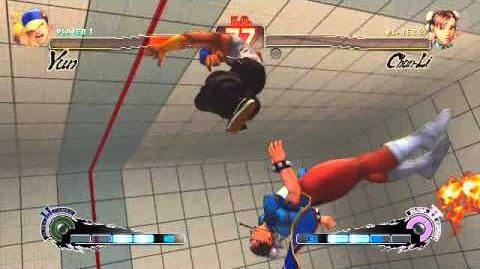