The Soul Throw (ソウルスルー, Souru Suruu?) is one of Rose's special attacks, introduced along with her in the Street Fighter Alpha series.

Executed by performing a "Shoryuken" motion (forward, downward then down-forward) and pressing punch, Rose jumps up at around a 45-degree diagonal angle, sparkling with Soul Power, and attempts to grab an airborne opponent; if successful, she throws them down to the ground violently.

In Street Fighter V, this move is replaced with Rose's newest anti-air move, Soul Bind. However, during her Critical Art, she performs the Soul Throw to toss her opponent to the other side of the stage before blasting them with a beam of Soul Power.

The Soul Throw is purely an anti-air move, and a good one, as it flies at a good angle with average speed and is also unblockable. As with most anti-air specials, Rose will be vulnerable during the descent if the move misses, or if she gets hit by any other move with higher priority. 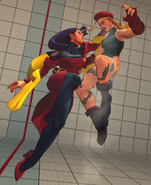 Rose performing Soul Throw on Cammy during her Critical Art.