Ibuki sticks her foot out in front of her. Spin Kick was removed in Street Fighter V, however in that game her regular standing light kick is visually similar to Spin Kick, replacing her SFIV era LK completely.

This attack starts up in 4 frames, due to the latest version of Ultra Street Fighter IV not only already having her close and far LP have 3 frame startup as previous games, but also making her crouching light punch 3 frame it devalues spin kick. It does have a little more horizontal range than said attacks making Spin Kick rather favorable in footsies. While a little hard due to the Screen Freeze and hitstun of a light attack, it can be super jump canceled. meaning this is Ibuki's longest reaching attack that she can cancel into Hashinsho with a high degree of execution. Making professional Ibuki players able to punish -4 and -5 attacks with high damage.

When using LK Tsumuji as a blockstring ender, it is recommended that Ibuki players use Spin Kick as the attack that will be canceled into rather than her standing medium kick. This is because Ibuki's Medium Kick physically moves her forward. As Tsumuji itself also pushes Ibuki forward many characters such as Hakan will be in range to punish Ibuki's -4 attack coming off her Medium Kick while Spin Kick could keep Ibuki just far away for some characters to punish.

This attack has similar frame data to it's IV incarnation with the same 4 frame startup. It's horizontal range was nerfed in the 2013 patch of the game, making her toe area of her foot not actually connect with her opponent. Still this attack was buffed in that it does 60 rather than 30 damage on hit, making it's damage on par with medium attacks despite Spin Kick itself coming from a light kick. This can be useful in Juggles such as after Tsumuji, as it starts up faster and recovers faster than her medium kick.

Despite this attack's horizontal range, it does suffer from being classified as a Unique Attack, as it's Unique Attack status means it can not be used in conjunction at all with the game's Cross Rush mechanics. Another hindrance is that despite the medium-like damage, it still does the hitstun and Screen Freeze of a light attack, mostly restricting Ibuki to canceling this attack into light kick or EX Tsumuji, or her Super Art. Spin Kick provides Ibuki chances to punish attacks that others without horizontal range can not, such as Lars's non EX Dynamic Entry, with Spin Kick Ibuki can punish the attack on block and actually cut off his followup attack.

For Footsies while this attack is decent it's use is debatable, due to how it extends her horizontal hurtbox compared to her crouching light punch. Recent SFXT meta has been testing a community termed "Anti Lars Tech", a technique that attempts to catch extended hurtboxes and immediately Buffer into launcher. Ibuki's crouching jab doesn't extend her hurtbox much in comparison to it's horizontal hitbox despite overall less range than Spin Kick, meaning Ibuki can actually catch high range horizontal attacks such as the aforementioned Lars's crouching medium kick with her crouching jab and tag in her partner for high damage. This is something Spin Kick can not do due to not working with Cross Rush. 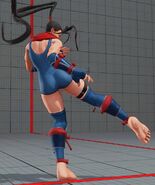 While this attack was removed in Street Fighter V it's animation is mostly used in said game.

In UFS Spin_Kick is refereed to as Maki Geri.
Community content is available under CC-BY-SA unless otherwise noted.