The Spinning Piledriver (スクリューパイルドライバー, Sukuryuu Pairudoraibaa?, "Screw Piledriver"), also known as the Screw Pile Driver in Street Fighter V, is one of Zangief's special attacks, and among his most recognizable. It was introduced in Street Fighter II. It is often abbreviated as "SPD".

It also appears as part of Seth's borrowed moveset in the Street Fighter IV series, Haggar can use it in Final Fight Revenge, and it is one of the moves Ace has access to in Street Fighter EX3.

Both versions are executed by performing a full-circle motion in either direction and pressing punch. The strength of the punch button determines the range and amount of damage inflicted. The Light version has the longest range, but does the least damage. Conversely, the Heavy version has the shortest range, but inflicts the most damage. However, the EX Special versions have longer reach and faster execution. It also inflicts the same amount of damage as the Heavy version.

Zangief attempts to grab his opponent. If successful, he holds the opponent upside down by the waist, then leaps into the air with the opponent's head between his legs while spinning rapidly, Zangief smashes the opponent headfirst against the ground for massive damage.

Seth also attempts to grab his opponent; if successful, he simply grabs his opponent, punches them into the air, and then teleports up to them. He performs the rest of the move as normal, slamming the foe into the ground.

Haggar's version in Final Fight Revenge is identical to Zangief's, except that he yells out "Geronimo!" when performing it.

Seth's Spinning Piledriver, while similar to Zangief's visually, has significantly less range and damage compared to the original. It is instead used as a potential mixup tool rather than being the primary option.

Zangief setting up Ibuki for his Spinning Piledriver in Gem Fighter.

Zangief setting up Cammy for his Screw Pile Driver. 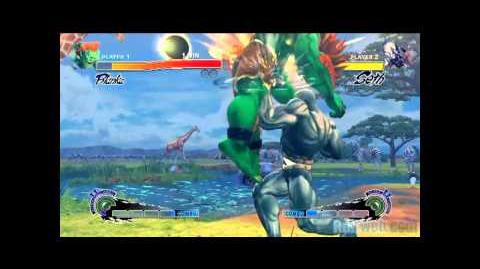