The main story of the game revolves around a strange, cubical object that crash-landed on Earth, somewhere in Antarctica. Nobody knows exactly what the object is, where it came from or what purpose it has, only that it appears to release a powerful energy when beings come into conflict around it. As a result, researchers nickname the strange box "Pandora". Several characters from the Tekken and Street Fighter universes form teams of two and search for Pandora, each with their own motivations.[3]

The game will use a modified Street Fighter IV engine and will include a Versus Mode, a Training Mode, and, "Tag Team combat where players select two fighters to deliver knockout assist attacks and special combos". The KO system works similarly to Tekken Tag Tournament, where the fight ends when one member of the team has been knocked out. There will also be a 'Scramble Mode' battle, whereby all four chosen characters battle at the same time in their respective teams, reminiscent of the Street Fighter Alpha Dramatic Battles. [1] A new feature will be the "Pandora" mode, where players can relinquish their partner in order to gain a temporary surge in power. According to trailers, this new mode will tie in to the game's story.

Another new feature will be the Gem System, where players can add up to five gems to their character in order to enhance their abilities and stats. Most gems are immediately in effect, though some gems will only take effect when certain conditions are met on the battlefield alone.

The below characters are confirmed[4]: 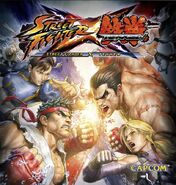 Retrieved from "https://streetfighter.fandom.com/wiki/Street_Fighter_%C3%97_Tekken?oldid=53314"
Community content is available under CC-BY-SA unless otherwise noted.