Raster, 384 x 224 pixels (horizontal), 4096 colors
Street Fighter Alpha: Warriors' Dreams, known as Street Fighter Zero (ストリートファイター ゼロ, Sutorīto Faitā Zero?) in Japan, Asia, South America and Spain, is a 1995 fighting game developed and published by Capcom. It was originally released for the arcade for the CPS II hardware. It was the first all new Street Fighter game produced by Capcom since the release of Street Fighter II in 1991.

There are two playing styles that can be selected after choosing a character: Normal and Auto. Auto differs from Normal in which the character will automatically guard against a limited number of attacks from their opponent, provided the character is not in the middle of performing an attack. Auto also allows the player to perform an instant Super Combo by pressing a punch and kick of the same strength simultaneously, but at expense of reducing the maximum level of the Super Combo gauge to one.

There are also new basic techniques such as Air Blocking, the ability to guard during mid-air; and Chain combos, also known as Alpha Combos, or Zero Combos in Japan, which are combos that are performed by interrupting the animation of one basic move by performing another with that of equal or greater strength. In addition to recovering from an opponent's throw, the player also has the ability to roll on the ground when they fall to the ground after an attack.

The single player mode consist of seven random computer-controlled opponents and a final opponent whose identity differs depending on the player's character. There are also three hidden characters in the game: Akuma, who returns from Super Turbo as an alternate final boss only after certain requirements are met, M. Bison, who serves as boss for certain characters and is also seen in some of the endings, and a new hidden character named Dan, who challenges the player during the course of the game if certain conditions are met. All three can be selected by stopping the "random fighter" option at the right time or via cheat.

The game also features a secret two-on-one Dramatic Battle mode in which two players as Ryu and Ken fight against a computer-controlled M. Bison, a mode inspired by the final fight between the characters in Street Fighter II: The Animated Movie. The Japanese arcade version of the game plays an instrumental rendition of the movie's battle theme, "Itoshisato Setsunasato Kokorozuyosato", which was replaced by Bison's regular theme in the overseas releases.

The immediate character roster includes Ryu, Ken, Chun-Li, and Sagat from the Street Fighter II series, along with Birdie and Adon from the original Street Fighter, who make their first appearances as playable characters in this game. Guy, one of the main playable characters from Final Fight also appears along with Sodom, a boss character from the same game. New to the series are Charlie (Nash in the Japanese version), Guile's combat buddy who uses the same special moves, and Rose, a female fortune teller from Italy who uses a mysterious type of energy known only as Soul Power. 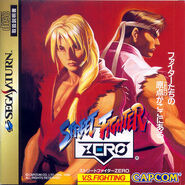 CPS Changer version (note the "PAUSE" message on the screen)