The game featured a number of improvements over the original, such as new endings, stages, moves and gameplay systems. Some character's endings were retconned from the original, overwriting their prior story (i.e. Akuma's), or tweaked.

Street Fighter Alpha 2 retains most of the new features introduced in the original Street Fighter Alpha, such as the three-level Super Combo gauge, Alpha Counters, Air-Blocking and Fall Breaking. The game has a thinner and longer health bar as well. Every character has two Alpha Counters; one for the kick and one for the punch button. Previously, characters only had one, and it was with either the punch or kick button.

The main new feature in the game is the Custom Combo system (Original Combo in Japanese versions), which replaces the Chain combos from the first Alpha. However, it is not available in regular attack as chain combos; if the Super Combo Gauge is on Lv. 1 or above, the player can initiate a Custom Combo pressing two punch buttons and a kick simultaneously, or vice versa. The player can then perform any series of basic and special moves to create a Custom Combo until the Timer Gauge at the bottom of the screen runs out. The only characters that can still perform Chain Combos in the game are Guy and Gen, but only to a limited extent. As such, the game has less combos and gameplay is generally slower, which balanced out most characters.

Likewise, proximity normals from older games have been removed for this title only, though a number of pre-existing normals have buffed properties to compensate.

The single-player mode, much like the original Street Fighter Alpha, consist of eight matches with computer-controlled opponents, including a fixed final opponent whose identity depends on the player's selected character. Each character also has a secret rival whom they can face during the course of the single-player mode after meeting certain requirements, in which then the rival will interrupt one of the player's regularly scheduled matches and exchange dialogue with the player's character. With Akuma now a regular character, a more powerful version of the character dubbed Shin Akuma replaces him as a secret opponent. Unlike Super Turbo and the original Alpha, Shin Akuma challenges the player before the player's final opponent, rather than as an alternate final boss.

However, in spite of these gameplay changes, the game is often notorious for the fact that a number of attacks end up being very unsafe on hit or somehow have various dead-zones in their intended hitboxes in comparison to previous titles.

All thirteen characters from the original Alpha return, with previously secret characters M. Bison, Akuma, and Dan now part of the immediate roster. There isn't a "Random Fighter" option, though. The graphics for all of the returning characters' home stages, cutscenes and endings have been completely changed to new ones. In addition, returning character's voice recordings have been made higher or deeper pitched, or removed and replaced completely. Sounds and background music in general have been noticeably changed in pitch. Damage inflicted by normal and special moves has been reduced as well.

Five additional characters are featured, extending the selectable roster to eighteen. The new characters include Zangief and Dhalsim from Street Fighter II; Gen from the original Street Fighter; Rolento from Final Fight; and Sakura, a new character who is a schoolgirl that idolizes Ryu and emulates his fighting techniques.

Street Fighter Alpha 2 also features an alternate version of Chun-Li in her Street Fighter II outfit as a hidden character, as well as Shin Akuma, a more powerful version of Akuma who appears as a secret computer-controlled opponent in the single player mode. The North American version of the arcade game also features three additional hidden characters who were not in the Japanese version: Evil Ryu, an alternate version of Ryu who uses the same power as Akuma; as well as extra versions of Zangief and Dhalsim who play like their counterparts from Street Fighter II: Champion Edition, including the omission of gameplay features such as super moves and air blocking.

Street Fighter Alpha 2 was released under the title of Street Fighter Zero 2 in Japan, Asia, South America and Spain. The American and European versions of Alpha 2 features three additional characters who were not in Japanese version: Evil Ryu and the EX versions of Zangief and Dhalsim.

Capcom released an updated version of Zero 2 titled Street Fighter Zero 2 Alpha only in Japan, which features all the additional characters from Alpha 2, as well as other changes to the game. In addition to Zangief and Dhalsim, Zero 2 Alpha also features EX versions of Ryu, Ken, Chun-Li, Sagat and M. Bison, all whom were characters from the original Street Fighter II': Champion Edition. Custom Combos are now executed by pressing a punch and kick button of the same strength simultaneously and now require half (1½ level) of the Super Combo gauge filled to perform them. Some of the characters have gained new moves such as Ryu's Shakunetsu Hadoken and Dhalsim's Yoga Tempest. Zero 2 Alpha also features a Survival Mode, as well as a 2-on-1 Dramatic Battle Mode similar to the hidden "Ryu and Ken vs. Bison mode" in the original Alpha. In this version, Evil Ryu has different dialogue exchanges and a different ending from his regular counterpart. The game also features an arranged version of the Alpha 2 soundtrack.

The original Alpha 2 was ported to the PlayStation and the Sega Saturn in late 1996. The PlayStation port features an arranged soundtrack, in the form of XA-Audio, while the Saturn version uses an arranged soundtrack in a streaming ADPCM format (which looped properly like in the arcade version). Both versions feature Shin Akuma as a selectable character via a secret code (which differs between the two versions: the PlayStation port requires the players to move the cursor in a Z pattern (from Street Fighter Zero), while the Saturn version requires an X pattern (from Super Street Fighter II X — Grand Master Challenge, Akuma's debut game), in addition to the classic-style Chun-Li. The Saturn port is the only one of the two versions to feature the characters of Evil Ryu, EX Zangief, and EX Dhalsim from the American arcade version. Additionally, the Saturn version also features an exclusive Survival Mode, as well as an Art Gallery.

A SNES port was also released in 1996. This version, widely regarded as a technical marvel for its time, makes use of the S-DD1 chip for graphic decompression. According to community member Gizaha, who reverse-engineered the game in early 2020 and created a patch implementing a number of enhancements, slow audio uploading to the console audio management chip (SPC700) and generally unoptimized/inefficient code cause the game to have several loading delays when entering and finishing matches. The SNES port suffered a number of changes:

Notably, for over 20 years after the game's release, it was widely believed that classic-style Chun-Li was the only hidden character, and that Shin Akuma was relegated to being only a secret computer-controlled superboss who deals double damage, thus requiring the use of cheat devices to allow players to select him. However, in early 2020, aforementioned community member Gizaha completed his reverse engineering of the game and discovered an apparently developer-exclusive method to legitimately unlock Shin Akuma in this version. The method has been console-verified and, if used in Arcade Mode, leads to "garbage characters" being loaded during the conversation in the final stage VS Gen (lending further credibility to the theory of the method being intended to be developer-only). Otherwise, the character is 100% playable, although strangely, he does not have an alternate color (if both players pick him in Versus Mode, both characters will have the exact same color palette).

A Windows PC port was also released in 1997, based on the PlayStation version, but using the arcade soundtrack in 22kHz WAV format. This version was sold as a bundle with the original Alpha in Japan. 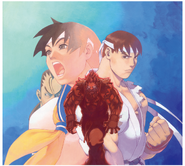 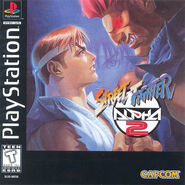 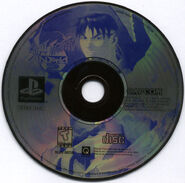 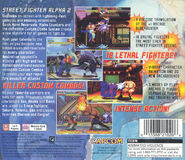 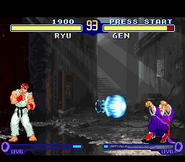 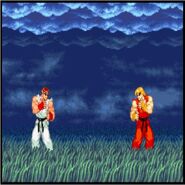