Street Fighter EX is a 2.5D fighting game originally released as an arcade game for the Sony ZN hardware in 1996, it is a spin-off of the Street Fighter series co-produced by Capcom with Arika and it is the first game in the EX series. Although non-canon to the mainline installments, it was the first Street Fighter game to have 3D graphics.

The Street Fighter EX fighting system uses fighting systems of the Street Fighter II and Street Fighter Alpha series. In many ways, EX still plays like a 2D fighting game, but the linear plane in which characters fight often changes along a 3D battleground. The game uses special moves and super combos familiar or similar to the previous games in the series. Like in Alpha and Darkstalkers, the super combo gauge, used to do Super Combos, was divided into three levels. The game introduces various new features to enhance the player's combat choices.

Aside from throwing the opponent or wearing away their life by using special moves to drain it, another way to fight blocking is the "Guard Break". The Guard Break is a move that, if it connects with the blocking opponent, breaks the block and makes the opponent dizzy. The Guard Break can be used at any time with one level of the super combo gauge. In EX3, The Guard Break is changed into the Surprise Blow, which still stuns enemies on contact and doesn’t need a level of the super combo gauge to work. However, unlike the previous Guard Break move, the move is guardable and stuns only if it's used on a crouching opponent. 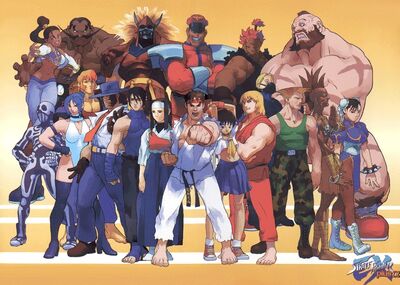 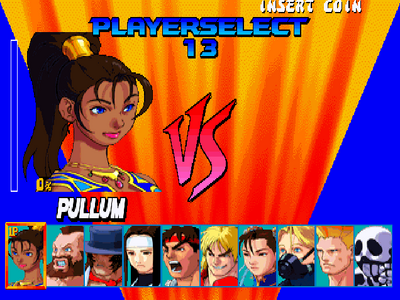 *-As of May 2000, Shiozawa is the only cast member to have passed away.

A few months after the original version of Street Fighter EX was distributed to the arcades, an upgraded version titled Street Fighter EX Plus was released to the arcades on March 1997. In this version, all the hidden time-released characters are available by default, as well as Garuda and Bison, who were exclusively computer-controlled in the original game. This version also adds four new hidden characters, Evil Ryu from Street Fighter Alpha 2, an alternate version of Hokuto named "Bloody Hokuto" and two cyborgs named Cycloid β and Cycloid γ. This was also the only version that has modified background stages and colors, much like the color changes on Champion Edition then Hyper Fighting. The first attacks, reversals and combos now display the amount of bonus they give to the Super Combo gauge, despite a typo in the mention, which reads "GAGE+10" instead of "GAUGE+10".

The PlayStation version also includes several game modes in addition to the standard Arcade mode: a dedicated two-player "Versus" mode, a "Team Battle" mode, a "Survival" mode, a "Practice" mode, a "Time Attack" mode and two interestingly uncommon modes: an "Expert" mode where the player's tasked with performing 16 "tests" consisting of moves or combos from each character, and a "Watch" mode where the player gets to witness a match between two computer-controlled characters, thus showing off the Playstation's 3D capacitites and 1st person emulation. Additionally, it also includes an arranged soundtrack and CG animated endings for all the characters, where there was previously text-only endings in the arcade versions.

Street Fighter EX plus α received overall good critics for its playability, despite its poor story content, and went platinum.