Street Fighter II: The Animated Movie was well received among fans of the games, and is generally considered to be far superior to the live-action film which followed it. The action sequences had a very realistic portrayal in comparison to other Street Fighter anime, and action anime in general, due to the assistance of K-1 founder and professional fighter, Kazuyoshi Ishii and Andy Hug. Though the movie's events do not seem to be acknowledged by the main games' storyline, many of the details were included in later games, in particular the Street Fighter Alpha series.

The movie begins with Japanese martial artist Ryu facing off against Muay Thai champion Sagat. With the thunder roaring in the background, they both fight in an epic duel. However, despite his renowned strength and abilities, Sagat has some difficulty defeating his opponent. Channeling his chi, he unleashes his built-up internal energy at his challenger. Ryu evades the blow, but Sagat knocks him down with a couple of kicks. Sagat attempts to finish Ryu off. However, Ryu counter-attacks with his signature technique, the Shoryuken, inflicting a severe wound on Sagat's chest, a wound that later becomes Sagat's trademark scar. Enraged and humiliated, Sagat charges towards Ryu. Ryu gathers internal energy and unleashes it all at once, in the form of a Hadoken, at which point it cuts to the film's title.

Time has passed since his battle with Sagat, and Ryu now travels the Asian continent in search of battle. On the other side of the world, Ken, Ryu's old training partner, friend and rival, finds himself dissatisfied with the lack of challenge. Eagerly desiring a rematch with Ryu, he reminisces over his childhood experiences. Meanwhile, an evil terrorist organization called Shadaloo, led by a foul-tempered man named M. Bison, plots to kidnap Street Fighters around the world in order to hypnotize them and use them to carry out his barbaric assassinations. After witnessing footage of Ryu's battle against Sagat, Bison gains an interest in capturing Ryu, due to his immense fighting potential.

Chun-Li, an Interpol agent with a personal grudge against Bison, seeks the help of Guile, whom she enlists him in locating Ryu. While gathering information on Ryu's known whereabouts, they also warn other Street Fighters, such as Dee Jay, to look out for Monitor Cyborgs in their general vicinity. This attracts Bison's attention, and he subsequently dispatches his assassin Vega to New York to kill Chun-Li. Vega ambushes Chun-Li in her apartment, and they engage in a vicious and bloody duel. The fight takes its toll on both fighters, but Chun-Li emerges victorious by kicking Vega through the wall and sending him falling to the street below (via the Hyakuretsukyaku), albeit at a heavy cost: she passes out from blood loss and slips into a coma just as Guile arrives to help.

Guile continues the investigation in Chun-Li's place, seeking to get revenge on Bison for murdering his close friend, Charlie Nash. Bison gains an interest in Ken after seeing Monitor Cyborg footage of him fighting T. Hawk and notices that Ken uses the same martial art style as Ryu. Meanwhile, rumors of an underground terrorist organization named Shadaloo that has unleashed several attacks on world governments and political figures attracts the interest of Interpol. After learning of Ken's whereabouts, he heads over to Seattle. Ken, meanwhile, is driving home after dropping off Eliza, to whom he has just proposed. On the way, though, he's ambushed by Bison, who captures him easily. Guile arrives after Bison's VTOL jet flies away, only to find Ken's vacant car in the middle of a deserted road. With no other leads, Guile heads to Southeast Asia in the hopes of getting to Ryu before Bison does. Bison, however, is aware of Guile's intentions and sets out on an intercept course with Ken in tow. Sagat begs Bison to allow him to fight Ryu again, but Bison reminds Sagat that he has orders to go to New York to eliminate Cammy and Vega. Out in Southeast Asia, Guile finds Ryu and warns him of the plot and the possibility that Ken may have been brainwashed by Bison. At that point, Bison arrives and steps out of the jet with Ken.

Controlled by Bison, Ken fights Ryu with a seething rage. Ryu, unwilling to hurt his friend, attempts to reason with him. Bison defeats Guile easily, while Bison's henchman Balrog and E. Honda fight (while rolling off the mountain in the process). Meanwhile, Ken beats Ryu savagely, who is unwilling to hurt his friend. Memories of the past wreak havoc on Ken's mind, and finally, through memories of his past with Ryu, Ken succeeds in breaking Bison's control over him. However, Bison appears and uses his power to knock him out, and then tosses him into the forest behind the battlefield. With no help at hand, Ryu takes on Bison alone and is beaten back. Ken regains consciousness, and discovers he cannot move his legs, but finally manages to climb to the top of a hill and witnesses Ryu's battle against Bison. Upon seeing this, Ken recalls his master's teachings of Neijia and the I Ching to heal his body and rejoins the battle. Aiding Ryu, the pair succeed in defeating Bison with a combined Hadoken, seemingly vanquishing Bison. The Hadoken flies into the VTOL, exploding on impact. Ryu and Ken assume that Bison has been defeated, and E. Honda reemerges carrying the unconscious bodies of Guile and Balrog to witness the end of the spectacle.

Later that night, a combined Interpol and military air strike successfully locates and bombards Shadaloo's main base of operations. Guile returns to the hospital and finds out that Chun-Li has recovered from her injuries (after she plays a mean-spirited practical joke on him).

Somewhere in America, Ryu and Ken bid farewell to each other, as Eliza arrives to pick Ken up. Ryu begins his journey anew. That is, until he sees a huge truck heading right for him with Bison (who apparently teleported himself to safety sometime after the Hadoken hit him and before it hit the VTOL) in the driver's seat. Thinking of preparing for another match, Ryu readies himself to fight against the Shadaloo leader.

Two English dubbed version were released directly to VHS and Laserdisc in 1995: a tamer, PG-13 version and an unrated version which contains, among other things, a slightly more revealing shower scene featuring Chun-Li that is still censored from the original Japanese version. The UK version contains the Chun-Li shower scene and all the swearing and is rated 15 by the British Board of Film Classification. In addition, a slightly different version of this movie appears on both the PlayStation 2 and Xbox versions of the Street Fighter Anniversary Collection as a bonus feature accessible from Hyper Street Fighter II's Gallery Mode. It is more censored than the PG-13 version in terms of language, and contains some other minor edits not related to mature or vulgar content.

The American VHS releases and the version in the North American Street Fighter Anniversary Collection were "pan and scan", while the Region 1 DVD has non-anamorphic widescreen. The European VHS version is non-anamorphic widescreen. These localized English versions replaced the original Japanese soundtrack consisting of J-Pop, orchestral and jazz with licensed, popular alternative, Western music from Korn, KMFDM, Alice in Chains and other bands, as well as a new instrumental score.

Released December 15, 2015, this release by Discotek contains the Japanese original cut and restores US PG-13, US Unrated and UK Unrated in 1080p HD quality by using original masters. Furthermore, it is possible to use the Japanese soundtrack with the English voices and vice versa. The movie's subtitles also went through a more accurate translation process.

The alternative/grunge-oriented musical score for the English version was composed by Cory Lerios and John D'Andrea of Baywatch fame. Songs featured in the movie include "Blind" by Korn; "Them Bones" by Alice in Chains; "Israel's Son" by Silverchair; ""Hallucinations (Dream World Mix)" by In the Nursery; "Evil Dancer" by Black/Note; "Ultra" by KMFDM; "Cuz I'm Like Dat" by Smokin Suckaz Wit Logic; and "Mantra" by Intermix.

Capcom released an interactive movie game based on the film, simply titled Street Fighter II Movie for the PlayStation and Sega Saturn in 1995. The game involves the player taking the role of Shadowlaw's Monitor Cyborgs, who would simply observe the events of the movie to collect move data from fighters. The game's fight sequences features an interface similar to Super Street Fighter II Turbo, where the Cyborg has to fight Ryu. Cyborg's special moves include the Hadoken, the Shoryuken and the Tatsumaki Senpukyaku, as well as Ken's Super Combo from Super Street Fighter II Turbo, the Shoryureppa. There are some extra scenes not present in the movie and three possible endings, depending on the result of the Cyborg's fight with Ryu.

Three artbooks were released in Japan only in 1999. The first is titled The Complete Works of Street Fighter II Movie, and has artwork and sketches for the film. The second is titled Street Fighter II: The Movie Perfect Album, which features more artwork for the movie, and the last is titled The Magnificent World of Chun-Li, which has artwork, stills, and sketches of Chun-Li for the film.

A manga adaptation of the film was authored by Takayuki Sakai and serialized in the monthly CoroCoro Comic in 1994, later collected in a single tankōbon. An English adaptation of this manga was published Viz Communications as a six-issue comic book in 1996.

Street Fighter II: Yomigaeru Fujiwara-Kyou is a quasi-sequel to the film, an educational short film which takes place after the movie and details Ryu, Ken, Chun-Li and E. Honda being sent to the past to Fujiwara, where Ken tells Ryu about the history of the ancient capital before they are sent back to the present.

The success of this movie prompted Capcom to create the Street Fighter Alpha series and flesh out the backstory of many of the characters; in addition, several details from the film were included in the storyline of the series and other future games. Many references and homages to the film have been made as well. 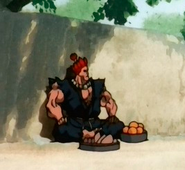