Street Fighter Wiki
Register
Don't have an account?
Sign In
Advertisement
in: Articles requiring cleanup, Articles in need of images, Articles with incomplete sections,
and 2 more

Chun-Li is seen moving on with her life as a young single girl, keeping herself busy by working at an eatery, or by traveling. She reminisces the memories and the fights that took place during Street Fighter II. She admits to herself that the life she expected wasn't all she'd imagined it would be. Chun-Li finds her inner strength reawakened as she finds herself back into action, presumably to continue tracking down Shadaloo's movement's, M. Bison, as well as the S.I.N. Organization.

Meanwhile, Guile is informed by his superiors that the ongoing search for Charlie Nash would be called off, despite Guile's adamance. Guile once again leaves his family to continue searching for Charlie.

Despite the entire world believing Shadaloo's destruction, Cammy isn't convinced, convinced that the disappearance of M. Bison and his henchmen was not enough evidence to support that Shadaloo had been destroyed.

In her Aftermath episode, Viper is seen exploring the Temple Hideout that M. Bison once used as the final setting of his World Warrior Tournament but would fall into disrepair after the fall of Shadaloo. After reaching a nearly-abandoned village near the temple, she meets and interviews a man who is the sole inhabitant of the village, with the other inhabitants leaving after the fall of Shadaloo. The man reveals that while Shadaloo did subjugate the village and used it as a base of operations, they've also supplied the village with needs. The scene then shifts to a flashback where Bison's cause of death has been revealed. It was revealed that Ryu, Ken, Chun-Li, Guile and Cammy managed to reach Bison in the tournament and managed to defeat him in a fight that ensued in the wilderness.

After being urged by Guile to surrender, M. Bison refuses and attempts to kill all of them by unleashing all of his Psycho Power to kill all of them but fails as it only manages to blow them back. In the ensuing aftermath, M. Bison's body would be recovered the Shadaloo scientists so that he can be revived and the government would tirelessly investigate the Shadaloo base, which has been blown up following the death of Bison. Despite lacking any evidence that proves that the other members of Shadaloo have died, the government would presume that the other members have also died. However, Balrog, Vega, and Sagat were revealed to still be alive and well. After being partially resurrected, Bison would send some agents in an attempt to re-recruit the former members.

Despite succeeding in recruiting Balrog and Vega, Bison would fail to recruit Sagat, who tries to assault the agent Bison sent. The scene would then shift to Bison, whose body was incomplete but adequate enough to stand up and fight. Seth and Abel would then be revealed before Crimson Viper muses about the flowers and its luck in growing without intervention.

In his Aftermath episode, Ryu is seen fallen conscious in the ground of a wide camp in the middle of the night, surrounding by many fireflies. As he watches a firefly flying, his surrounding starts to be hit by Gohadokens, launched by Akuma, resulting in an intence fire. As Ryu looks above him, he notices Akuma, who grabs him by the head. Akuma starts questioning Ryu why he refuses to use his Satsui no Hado, accusing him of cowardice.

Akuma then throws Ryu back to the ground, and tells Ryu he is following the same path as his deceased master, a path of that lead to weakness and straight to hell. Ryu then as he stares at the fire and has a series of flashbacks. First he rembembers of him watching the fight between his master and Akuma. Later he remembers Gen on a raining place after defeating him saying that let both of him and Akuma, as death comes to all of those who live by the warrior's code. Finally Ryu then remembers of his first memory, his younger self being carried by Gouken to his dojo.

As Akuma is about to leave, Ryu stands up and prepares to face him. As they battle, Ryu successfully throws Akuma at the sky, and charges a Shinku Hadoken, but Akuma interrupts and unleashes a series of Messatsu Gohados. Ryu manages to dodge them all, strikes a punch that puts Akuma back to the ground, and hit him with a Shoryuken. He then starts to charge a Metsu Hadoken, while Akuma is fastly approaching him. As Ryu is about to unleash his Hadoken at Akuma, the launch is interrupted by Ken using a Shinryuken. He tells Ryu that he's mad because Ryu tried to take down Akuma without his help.

In an unknown forest, a mysterious man unleashes a technique at a waterfall, spreading its water in a rain like move. 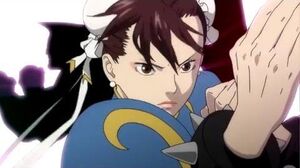 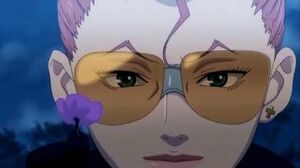 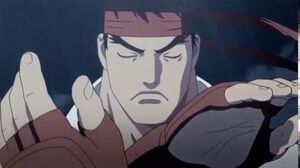 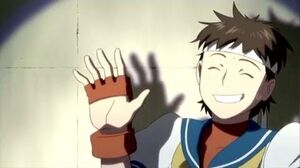