Combo potential is not only subject to follow opponents in juggles. The super jump can be canceled in it's pre-jump frames. E.g., Chun-Li can super jump cancel her close heavy kick and Super Cancel before she leaves the ground. Also, off of certain normal moves, Crimson Viper and Ibuki can combo into Burst Time and Hashinsho respectively.

A Super Jump has 20 recovery frames after landing on the ground. It is recommended that a super jumping player do any normal attack as it reduces their recovery significantly from 20 to 4. Furthermore, only the first pre-jump frame for Ibuki and Viper is immune to Grabs and Throws, making this a poor defensive option

Ibuki super jump canceling out of her medium Kick 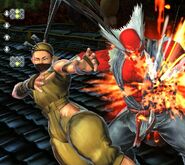