Super Puzzle Fighter II Turbo is a puzzle game which is inspired by the Capcom arcade game Pnickies and Sega's arcade game Baku Baku Animal. As in that game, the player controls pairs of blocks ("gems" in game parlance) that drop into a pit-like playfield (twelve blocks tall by six blocks wide, with the fourth column from the left being thirteen blocks high). In Super Puzzle Fighter, however, gems can only be eliminated by coming into contact with a Crash Gem of the same color, which eliminates all adjacent gems of that color, setting up the potential for huge chain reactions.

As gems are eliminated, "garbage blocks" called Counter Gems will drop into the opponent's playfield; these will eventually become normal gems, but only after they count down to zero (most Counter Gems start at "5" and are reduced by one each time a new pair of gems is dropped on that board), and until that time they cannot be eliminated by normal means. The only way to eliminate Counter Gems before they become normal gems is to place a Crash Gem of that color nearby so it eliminates at least one normal gem. If this is done, all Counter Gems immediately adjacent to the Crash Gem will be taken out as well.

Additionally, gems of the same color that form squares or rectangles (of at least two blocks tall and wide) in the pit become a giant Power Gem of that size and color; eliminating these as part of a combo increases the number of Counter Gems that would otherwise normally appear on the opponent's board. The only other type of piece to appear is a diamond, which eliminates all the gems—normal, Power, Counter, and Crash alike—of whichever color gem it lands on (this, too, will cause Counter Gems to appear on the opponent's board; however, it will always be a smaller number than if the same number of gems had been eliminated as part of a normal chain reaction). The diamond piece appears every 25 pieces.

During the game, super deformed versions of various characters from Capcom's two main fighting game series (Street Fighter and Darkstalkers), will act out a comical battle based on how the game is going. Every time one player sends Counter Gems to his or her opponent, his or her character will perform a typical fighting-game action, anything from a taunt to a special move. The more Counter Gems the player sends over, the "bigger" the move the character will perform. These animations, however, are purely cosmetic and have no actual bearing on the gameplay.

The Windows 95 port features a new original mode. In this mode, the "Super Combo Gauge (Crash Gauge)" has been added as a new system, and up to 3 gauges are stocked each time a gem is dropped, and when the rotation button is pressed at the same time, this gauge is consumed at any time. You can also now turn a falling normal gem into a crash gem. This system reduces the element of luck and makes it more strategic. In addition, it is equipped with a "count speed" that allows you to add a time lag to the advance of the counter gem number meter, and a "count number" setting that allows you to change the initial value of the counter gem.

The game continues until one player's field reaches the top of its fourth column (which is where all new gems first appear). That player is the loser.

HD Remix includes the three gameplay modes included in the Dreamcast version, plus an exclusive mode:

As noted above, all of the playable characters in Super Puzzle Fighter (with one exception) are borrowed from Capcom's two major fighting game series, Street Fighter and Darkstalkers. The super deformed take on these characters gave the game a unique, light-hearted feel that served as a deserved break from the rough and edgy fighting games that were prevalent at the time of Super Puzzle Fighter's initial release. A fighting game using these character sprites called Super Gem Fighter Mini Mix (Pocket Fighter in Japan) was released in 1997. Akuma is the game boss and Devilot is an unplayable secret character controlled by CPU that rarely challenges the player. Akuma, Dan and Devilot are all unlockable characters in the console version.

When development on Night Warriors: Darkstalkers' Revenge, Cyberbots: Full Metal Madness and Street Fighter Alpha 2 was completed, development began on Super Puzzle Fighter II Turbo. On developing the characters and backgrounds in the game, the artists used their appearances from their respective games as reference to draw the super-deformed versions.[citation needed]

The Playstation, Sega Saturn, Game Boy Advance, and Dreamcast versions of the game feature a new challenge mode called "Street Puzzle", in which the player must defeat specific characters to unlock additional content, such as alternate character palletes, win icons, and more.

The game's music is scored by Tatsuro Suzuki, as well as Isao Abe, Yuko Takehara, Syun Nishigaki, Setsuo Yamamoto, and Takayuki Iwai. The game consists of special arranged versions and mixes of music themes from the represented games, as well as some original music. The soundtrack album for the game was released on January, 22 1997 in Japan only, which also includes the soundtrack for Quiz Nanairo Dreams.[citation needed] 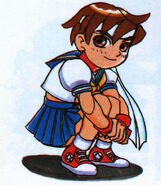 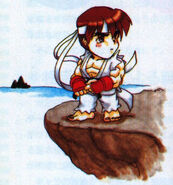 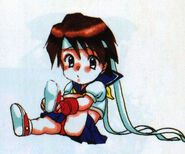 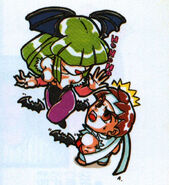 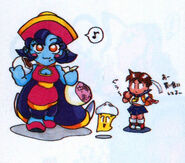