Super Smash Bros. Ultimate (大乱闘スマッシュブラザーズ SPECIAL, Dai rantō Sumasshu Burazāzu Supesharu?) is a fighting video game developed by Sora Ltd. and Bandai Namco Games and published by Nintendo, released for the Nintendo Switch on December 7, 2018.[1] The newest installment in the Super Smash Bros. series; it is generally considered to be the fifth installment, although game director Masahiro Sakurai considers both versions of the previous title the fourth and fifth installments respectively[2] which would make Ultimate the sixth installment.[3] The game was first teased at the end of Nintendo's 2018 Direct presentation in March and later formally announced at their Direct presentation for E3.[4]

Like the rest of the series, Super Smash Bros. Ultimate is a crossover platform fighting game where players use different attacks to damage their opponents and knock them out of an arena. The game features characters, items, music and stages from various Nintendo franchises as well as some third-party franchises, including Street Fighter. Ultimate is most notable for adding every single playable fighter from previous titles.

Super Smash Bros. Ultimate is a non-traditional fighting game in which players use different attacks to damage their opponents and knock them out of an arena.[5] The game has a number of playable modes: its base Versus mode where up to 8 opponents, either human or computer-controlled, can battle against each other. The are also various other single player modes. In most modes, players are given a fixed number of stocks at the start of a match; when knocked off screen, they lose one stock and respawn shortly thereafter if they still have stocks remaining. If a player has lost all of their stocks, they are out of the match.

All characters have been updated with new moves and abilities, with many characters being rebalanced based on feedback from players of past games. The characters that have abilities that require a charging-up or cooldown period have been given visible meters on their on-screen character icons for players to track the status of these abilities; for example, the icon for Final Fantasy's Cloud shows a bar that slowly charges his "Limit Break", a buff that makes one of his specials much stronger for a single use.

New items based on the included franchise properties, such as a Launch Star from Super Mario Galaxy that will propel those passing through it to a different area of the field, are added along side previous items, such as the Star Rod from the Kirby series which, when swung, shoots out a small star for a short horizontal distance. Ultimate have both Assist Trophies and Poké Balls items, which, when activated by a player, briefly summon non-playable characters which aid in battle. These characters includes those previously featured in past games and additional new characters which, in the case of Assist Trophies, includes third-party additions such as Konami's Bomberman.

When setting up a match, players have the option to select a stage to fight on, or let the game randomly pick a stage. Each stage, typically based on the included franchises, has a unique configuration of platforms and environmental hazards, along with themed background music. Ultimate features a large number of returning stages, in addition to new ones such as Moray Towers from Splatoon.[6] Each stage has a more-difficult 'Omega' form where the game field hovers over a bottomless void, which takes one life from any character that falls into it. Each stage can also be used in a standard Battlefield layout, a standard three-platform field featured in previous Smash Bros. games but using the visuals and musics from the stage.

Unlike previous titles since Super Smash Bros. Melee, Ultimate features no collectible trophies as they have been replaced with "Spirits", a type of power-up item character similar to the Stickers from Super Smash Bros. Brawl. Also, in the new game mode also titled Spirits, players can assign a Spirit character, one of hundreds of various characters from the crossover series, to their fighter to add their power to the primary fighter, such as attack strength or special abilities. Spirits themselves can have support Spirits to boost their own values. Spirits are collected by winning Spirit battles against the target Spirit, with rules and conditions inspired by the Spirit character. Winning matches against component opponents or other human fighters in Spirit modes helps to raise the level of the equipped Spirits, and several additional facilities exist to dismiss Spirit and gain their core essence to transfer to another Spirit among other steps.

The game also feature a new Adventure Mode, titled World of Light, that has an stronger focus on entertainment then story like The Subspace Emissary (Super Smash Bros. Brawl's Adventure Mode) had. World of Light also works atop the Spirits game mode.

Ultimate features a crossover cast of characters from several different Nintendo franchises, as well as from third-party properties. The game's most notable aspect is that it includes all playable characters from all previous Super Smash Bros. games, including those who were previously cut or released as downloadable content (DLC).[9][10] It also features 11 newcomers in the base game, with twelve additional post-launch DLC characters. In total, 74 characters (76 if counting the Pokémon Trainer's Pokémon as three fighters) are playable in the base game and 86 (89) characters are playable overall, the highest number of playable characters in the Super Smash Bros. series' history.

Additionally, certain clone fighters are now known as "Echo Fighters".[4] For instance, newcomer Princess Daisy (who previously was an alternate color scheme for Princess Peach in prior titles) is an individual Echo Fighter, and newcomer Dark Samus (who was an Assist Trophy in the previous game) is now an Echo Fighter for Samus. Returning characters Dark Pit and Lucina (clones of Pit and Marth respectively) have also retroactively been given this title. While Echo Fighters share identical movesets and essentially all of the main attributes of the original fighter they are an almost complete clone of, they may have minor differences in gameplay and mechanics; one example of this is Lucina having even damage all along her blade when she strikes, unlike Marth who has stronger damage and knockback at the tip of the blade.

All the fighters have been given numbers arranged by the order they joined the Super Smash Bros. games. The Echo Fighters, however, don't have their own among the roster; they instead share the number with the fighter they are based off of, along with an epsilon symbol (ε) or apostrophe ('). The Pokémon Trainer's Pokémon counts as three characters, but they all only occupy one roster spot, with the selection of the starting Pokémon coming after the player select them.

Despite the director's statement of the game having a limited amount of newcomers (due to the large number of returning fighters),[1] Ultimate features 23 new fighters; eleven of them in the base roster, one post-release DLC fighter, five DLCs in the first "Fighters Pass" pack, and six more additional fighters in the second and final pack.

Several of the characters have received updates to their outfits, such as Mario having Cappy from Super Mario Odyssey accompanying him, and Link wearing his outfit from The Legend of Zelda: Breath of the Wild.[11] Others have been updated or new moves and abilities.[12][13] Players will not have access to all characters on the base roster when starting the game, and will need to unlock them by completing various challenges in-game; Nintendo anticipates making it easier for players to unlock all of the game's characters compared to previous games.[9] The starting roster consists of the default roster from the first Super Smash Bros. game of the original 8 characters.[14][15]

As Ultimate includes every fighter from previous titles, Ryu appears as a returning character. Ryu's mechanics have also been changed for play in 1v1 fights; he always faces his opponent's direction. Sakurai has stated that this would make it easier for players to input Ryu's special attacks manually.

Ken, who was previously a trophy in Super Smash Bros. for 3DS and Wii U, appears playable in the game as an Echo Fighter to Ryu. Most of the differences the two share in the main series (i.e. Ken's flaming Shoryuken and Ryu's stronger Hadouken) were implemented into the game. Like Ryu, Ken has two Final Smashes: The Shinryuken and Shippu Jinraikyaku.

Guile appears as an Assist Trophy.

In addition Ryu's return, the Suzaku Castle was brought back as one of the returning stages. The Street Fighter stage was updated to include all character themes from Street Fighter II. Guile's and Vega's themes received new remixes for the game.

In World of Light, several fighters appear as spirits that can be acquired by beating certain characters under certain conditions. Most of the Street Fighter spirits appear in stamina matches to match the feeling of the original games. They also possess characters that either look or play similar to the fighter (i.e. Chun-Li possesses a heavily kick-focused Samus wearing her Zero Suit in a deeper shade of blue - referencing how it is the Street Fighter Alpha version of her - and Blanka possesses a green-furred Donkey Kong wearing a Screw Attack badge, which gives him Rolling Attack-like jumps).

One of the areas in the World of Light called the "World Tour" pays homage to Street Fighter II's arcade mode by having the player to fly to different parts of the world (whose map appears as an upscaled version of the one seen in the character selection screen) to challenge the spirits of the respective areas. The map ends by allowing the player the chance to unlock Ryu. In this area, once the player rescues Zangief's spirit, they gain access to Zangief's dojo, where he trains other spirits in the Overthrow Style.

The following is a full list of the Spirits related to Street Fighter. 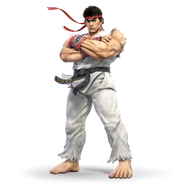 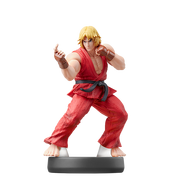 Guile as he appears in-game.