Super Smash Bros. for Nintendo 3DS and Wii U

Like the rest of the series, Super Smash Bros. for Nintendo 3DS and Super Smash Bros. for Wii U are non-traditional fighting games where players use different attacks to weaken their opponents and knock them out of an arena. The games are crossover titles that feature characters, items, music, and stages from various Nintendo franchises, such as Mario, Donkey Kong, Pokémon, Fire Emblem, Kirby, Metroid, Star Fox, The Legend of Zelda and Kid Icarus, as well as from the third-party franchises of Sonic the Hedgehog, Mega Man, Pac-Man, Street Fighter, Final Fantasy, and Bayonetta.

New features include having up to eight players fighting at a time (in certain stages) on the Wii U, support for amiibo, using the Miis as fighters, post-release downloadable content including new fighters and stages, and customizable special moves unlockable for every non-DLC character. Some older features were removed, such as the story mode in predecessor Brawl. A sequel to Brawl was announced at E3 2011, but development did not begin until 2012 and the game's official unveiling did not come until E3 2013. The gameplay was designed to be somewhere between that of the faster, more competition-oriented Melee and the slower, more casual-friendly Brawl.

Like in previous games in the series, Super Smash Bros. is a multiplayer fighting game in which the players use various attacks, techniques, and items to deal damage to their opponents and knock their opponents out of the arena. As a character's damage percentage increases, they fly back further when attacked, and may eventually be knocked far enough out of the playing field to be knocked out. One of the most notable gameplay changes is the removal of random tripping, introduced in the previous game. To assist players during fights, items sometimes appear on the battlefield, most of which represent the various video games represented in the series. An item called a Smash Ball allows players to use a powerful, character-specific attack, otherwise known as the "Final Smash". Another item is an Assist Trophy, which summons various non-playable characters from a represented series onto the field to assist the summoner, both of which were previously introduced in Super Smash Bros. Brawl.

Like its predecessors, Super Smash Bros. features collectible in-game trophies based on characters or items seen in various Nintendo or third-party games. Each stage now features an alternate Omega form, which replaces the stage's layout with a flat surface and removes all stage hazards. Certain stages, collectible trophies, and Assist Trophies are exclusive to each version of the game, with the Wii U version primarily featuring elements taken from console titles and the 3DS version taking elements primarily from handheld games. Both games feature revisited stages from past entries in the series.

There are several multiplayer modes as well beyond the simple Versus, which just creates a match. Online multiplayer gives the choice between Casual and Competitive games, which will add or remove odd stages or items or random elements. The 3DS version of the game includes Smash Run, a game of exploration where players travel through a vast dungeon full of enemies from various Nintendo properties, gaining a score before finally facing each other in a match, with their stats adjusted depending on how well they performed in the dungeon. The Wii U version has Smash Tour, a board game where players use Miis to wander around the board collecting Stocks and stats for a final match. The Wii U version also has a Tournament mode.

On June 13, 2015, Ryu was announced as a downloadable character for the game. Notably, Ryu's presence marked the first time in the series' history that a third-party company (in this case, Capcom) was represented by two playable characters, with the original Mega Man having been already included. His gameplay is heavily influenced by the Street Fighter games and he can even use Street Fighter-input for combos. Ryu utilizes his Hadoken, Tatsumaki, Shoryuken, and Focus Attack. By rotating the control stick at semicircle towards Ryu's direction, he can perform the Shakunetsu Hadoken.

A trophy of Ken is automatically obtained upon downloading Ryu. Ryu's stage, Suzaku Castle, also makes an appearance. The stage comes with six songs which consists of three versions of Ryu and Ken's themes respectively. Ryu's character poster was illustrated by Akiman, who designed the characters in Street Fighter II. A Ryu amiibo was released on March 18th, 2016. Ken would also be included in the next game.

The Trophies shown are from the both versions.

The Trophy shown can only be obtained on the Wii U version. 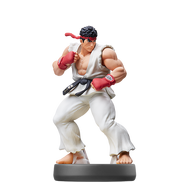