Super Street Fighter II features a new scoring system which kept track of combos, first attacks, reversals and recoveries made by the player and awards the player with bonus points by performing such deeds.

Another improvement from previous games was the reversal, allowing quick recovery into an attack after landing on the ground or blocking, thus negating the opportunity in previous incarnations of "ticking" one's opponent (i.e., hitting an opponent with a light attack and immediately throwing during their block animation. This was notable against large character such as E. Honda).

The faster game speed introduced in Hyper Fighting was removed and the gameplay is tweakable by pushing the control stick left or right at the title screen, between 1 to 4 stars, with four being the fastest.

Other subtle changes took place with most of the characters: new moves were added and parameters of the moves were altered, generally making the game more balanced than its previous iterations.

The number of "re-dizzy" combos were greatly reduced. Such combos involve executing an unblockable combination on a dizzied character that results in the target character becoming dizzy again.

Most of the graphics from the previous Street Fighter II games were either redrawn or recolored. All of the stages, face artwork, and the HUD feature all new graphics. The original opening sequence which featured two generic martial artists fighting in front of a crowd was replaced by a new opening featuring Ryu launching a Hadoken towards the screen.

New animation frames were drawn for all the characters for their basic and special moves, as well as new victory poses. For example, all four boss characters now have new animation frames for basic attacks (Vega and Sagat did not have jumping punches in the previous games), while Chun-Li now has a new animation for her Kikoken projectile technique. The music and sound effects were also remade and new voice samples were recorded for some of the characters. (i.e.: Ryu and Ken were given different voices) However, Ryu and Dhalsim still share the same groans when KO and when throwing the opponent.

Each character had available eight color schemes, depending on which button was pushed to select the character. Players could choose a character's original color scheme by pressing Light Punch ("Jab"), their color schemes from Champion Edition and Hyper Fighting by pressing Medium Punch ("Strong") and Heavy Punch ("Fierce") respectively (for the twelve original characters), or one of five new color schemes featured in the game by pressing any Kick button, pressing the Start button, or holding down any button for two seconds. (Exception: If Balrog is chosen with his color scheme from Hyper Fighting, more than just his clothing will change color - he will be given a darker skin tone and green boxing gloves, color changes not seen in the CPS1 Hyper Fighting installment.)

In addition to the standard single and two-player game modes, Super Street Fighter II also feature an exclusive eight-player single-elimination tournament mode dubbed Tournament Battle. This mode is only available when four Super Street Fighter II arcade game cabinets are connected together and all of them configured to "Tournament" mode. The Tournament Mode consists of three sets of four simultaneous matches: the initial eliminations, the semifinals and the finals. After the first set is over, the players are re-arranged accordingly based on their position: the winning players sent to either of the first two cabinets, whereas losing players sent to one of the other two. In the finals, the players competing for first place are sent to the first cabinet, the third-place players to the second cabinet, and so on.

All twelve characters from the previous Street Fighter II games returned, with many them having their basic and special techniques refined in order to adjust the overall balance. Some of the characters received new special attacks and animations, such as Ryu's Shakunetsu Hadoken, Ken's flaming heavy Shoryuken, and M. Bison's Devil Reverse.

Four new characters (T. Hawk, Cammy, Fei-Long, and Dee Jay) were introduced to the game in addition to the returning roster, expanding the number of playable characters to sixteen.

The number of opponents fought in the single-player mode against the computer remained unchanged. As in the previous game, the player fought against eight random initial opponents, followed by the four bosses (Balrog, Vega, Sagat, and M. Bison). Because of this, not all the characters featured in the game would be fought by the player. The bonus rounds from previous versions were still featured in the game, though their order was altered due to the increased number of foes faced.

Unlike most other fighting games that were also originally released in arcades, then ported to home consoles with significant changes and missing some features due to hardware limitations, the home ports of the Street Fighter II games usually retained a lot of the same content the original arcade versions had. However, these ports still had differences in comparison to the original, and depending on the version, some are near arcade perfect (good examples being the CD ports) while others have different looking graphics and different sound effects (the 16-bit versions).

This version included Super Battle (Arcade Mode), Versus Battle, Time Challenge, Tournament Battle and Group Battle. On this port, the character portraits in the continue screen lack any animation, being still images. All the sounds from the arcade game are here, but are a lot quiet sounding when compared to other versions. Also, the voice samples in this port are more chunkier sounding than in the others. A feature exclusive to this port is the option to select the number of characters faced in Super Battle Mode: Normal (12 opponents including the bosses, and bonus stages) and Expert (all 16 opponents and no bonus stages).

This version is a lot like the Genesis version, only with a few differences. This port features the same exact modes, and the options menu is the same as well, with the exception of the option to choose between Stereo and Mono output, which is exclusive to this version. The music plays faster than in the Genesis and, along with the voice samples, sounds better and clearer. There is also a minor stage alteration; the man and woman that were missing on Guile's stage in previous SNES versions of SFII are included in this one.

Another interesting note about this port is the characters' loss portraits: while mostly the same as the original arcade edition, the blood is recolored to a greyish/white color, due to Nintendo of America's strict non-violence policy during the early to mid 90's. This censorship was inadvertently present in the Japanese Super Famicom version as well. 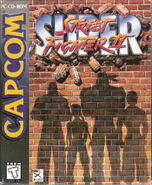