A Super Combo is a type of special move, (usually a more powerful version of a character's special move) that can be performed only under a certain condition and will strike an opponent multiple times. Each player has a Super Combo gauge at the bottom of the screen which is filled up while the character performs their basic and special techniques against the opponent. When the Super Combo gauge is filled completely, then the gauge will be replaced with the word "SUPER". The player will then be able to perform their Super Combo technique by inputting the specific command, which will then reset the Super Combo gauge back to zero. If an opponent is defeated with a Super Combo, then the background will flash red and yellow.

Similar to the Juggle Combo where the opponent is held up in the air by successive hits, the Air Combo differs because the character performing the combo does not remain standing on the ground, but rather uses the first hit of the combo (usually called the "launcher") to propel his opponent into the air and jumps in pursuit to continue hitting in close proximity throughout the duration of the jump. Those following hits will often give the opponent additional air momentum to keep being juggled longer, and lighter characters who are less affected by gravity (such as Dhalsim) are often able to sustain longer air combos.

This method has its strengths and weaknesses. "Old" characters cannot perform the Super Combo moves and they cannot fall safely from a throw. On the other hand, some features are beneficial, such as at the start of a Dragon Punch, "Super" Ken and "Super" Ryu are invulnerable when they perform their Dragon Punch and cannot be hit out of it, while normal Ken and Ryu can be hit out of it at any point.

Super Street Fighter II Turbo also saw the introduction of the series' first hidden character, Akuma, known as Gouki in Japan. Should the player succeed in defeating all eight preliminary opponents, as well as Balrog, Vega, and Sagat without using any continues and achieve a high score or reach the final match in less than 25 minutes, Akuma will reveal himself. Once the player reaches M. Bison, at the start of the round Akuma will warp in, and dispose of Bison. There is no name on Akuma's life gauge; the portrait is completely black and the background music changes to Akuma's theme music. In Hyper Street Fighter II, M. Bison's theme plays for a while until Akuma warps in.

The 3DO port was released on November 13, 1994 in Japan, with subsequent releases in North America and Europe. While the graphics are more accurately reproduced compared to the previous console ports for 16-bit platforms such as the Super NES, some of the backgrounds don't scroll like they do in the arcade version, the score system when performing combos is not accurately reproduced, and the order of opponents in the 1-player mode is a bit different as well. Although the loading times are considerably short by CD-ROM standards at the time, the game loads during battle when a player performs an elaborate move such as jumping (especially when both characters jump at the same time) and the play controls are affected occasionally as well. The soundtrack features the same remixed music from the FM Towns version of Super Street Fighter II (with a few additional remixes specific to Super Turbo).

This port also features "simultaneously button cancels", a feature that only existed in the arcade versions up until Hyper Fighting.

The MS-DOS version, developed by Eurocom and published by GameTek, was released on May 1995 in North America and Europe. The port is almost accurate to the arcade version and utilizes a six-button controller. There are secret commands to use each character's original color scheme, as well as moves that were removed from the 3DO version due to memory issues. The option menus have custom settings (such as enabling and disabling parallax scrolling) that allows the game to be played in a low hardware specs. The biggest change is the game's resolution. The game is played on a resolution of 320x200 on AT/PC-compatible machines and since the graphic data is ported straight from the arcade version, all the characters appear large due to the narrow screen size. Because of this, the distance between both fighters at the beginning of a match is a bit narrower than in the arcade version. There were many glitches in the initial shipments of the DOS port, such as characters landing and recovering normally after landing from a jump if they're knocked out in mid-air with a basic attack. A patch file was distributed that corrected these bugs, which were later fixed in version 1.5 of the retail release. A patch file for a version 1.6 was released as well. The music has been remixed as well, although the soundtrack is different from the one released for the 3DO.

An Amiga port was also released by Gametek (and ported by Human Soft) in 1996, which is graphically very close to the original arcade game and remixed stage tracks, but suffers from jerky animation and other shortcomings.

Super Turbo is included in Street Fighter Collection, a compilation for the PlayStation and Sega Saturn that also included the original Super Street Fighter II in the same disc, as well as Street Fighter Alpha 2 Gold on a second disc. Although the Super Turbo port is very accurate, the game suffers from slightly processing glitches that make the controls unresponsive during close-quarters combat in certain stages, and there's a bug that allows Guile to throw two "Sonic Boom" projectile attacks on-screen at the same time. Due to the CD-ROM media, the beginning of each stage theme is played one beat later for convenience. The Street Fighter II series took a while to appear on the PlayStation and Sega Saturn due to the fact that Capcom has already moved on to the Street Fighter Alpha series on the arcades.

Capcom released Super Street Fighter II X for Matching Service for the Dreamcast in Japan as an exclusive mail-order release via the online Dreamcast Direct store (later known as Sega Direct) on December 22, 2000. The Dreamcast version features an online versus mode compatible on Sega's "Matching Service" compatible only on analog modems. Although the Matching Service closed down on September 1, 2003, it is still possible to play the game online. The bonus rounds from previous Street Fighter II which were cut in the arcade version were restored in this port and can enabled via a special options menu. The port is considerably more accurate than the PlayStation and Sega Saturn versions, as almost nothing was changed aside for the score display. If the player fulfills a certain series of requirements, then Shin Gouki (the computer-controlled version of Akuma from the single player mode) can be used by the player, who boasts greater fighting skills than his regular self. There's also a third version of Akuma called "Ten Gouki" who can use the Shun Goku Satsu ("Raging Demon") technique as a Super Combo. Other secret options are available as well.

Released on June 13, 2001 in Japan, with subsequent releases in North America and Europe, Super Street Fighter II Turbo Revival is a port of the original Super Turbo for the Game Boy Advance with an all new title screen and character illustrations. Because the GBA only has four buttons installed on its hardware, the four action buttons can be easily customized. The character sprites and animations were transferred from the SNES version of the original Super Street Fighter II, the new techniques that were added from Super Turbo used the same sprites and animations from the arcade version. Guile's standing Heavy Kick for example (at close and far range) has him growing in size from one frame to the next. Likewise, the animation frames when a character advances towards an opponent are the same when he or she retreats. Only Akuma uses character sprites exclusively from the arcade version and his advancing and retreating animations are different as a result.

While the music quality is not of the same rate as the arcade version, the danger versions of the stage themes are included just like the arcade version's and there are exclusive remixes as well. Like the Dreamcast port, bonus stages from previous versions were also included. An easy control option can be activiate to allowed for easy perform of special and super combo moves.

Akuma can use the Shun Goku Satsu as a Super Combo, unlike in the arcade version (where he had none). The player can also unlock "Shin Akuma", a variation of Akuma who boasts even greater fighting skills, in addition to the regular version.

Also like every versions of Super Turbo, the requirement to fight Shin Akuma in Arcade Mode are the same. However, due to programming error in the North American and PAL region games, reaching Shin Akuma will hang the game in a corrupted screen with Akuma's artwork and music.

Numerous placement errors exist in the game, such as unlike in other versions of Super Turbo, the cutscene where Shin Akuma kills M. Bison in Arcade Mode is not shown. Furthermore, the location of the stage is shown to be Japan despite the game uses M. Bison's Thailand stage. Other notable placement error is the mixed winning quotes between Vega, Sagat, Balrog and M.Bison, where each character has incorrect winning quote from one to another.

Akuma can be unlocked once the player has accumulated 5,000 VS Points. Shin Akuma is unlocked at 9,999 VS Points. However, unlike the Dreamcast Super Turbo and HD Remix versions of the game, the Raging Demon has the usual 15 hits seen in earlier and later games. Due to the limited amount of buttons on the system, the Raging Demon can be executed with any Kick button.

Other new features and changes

Additionally, the bonus rounds from previous versions of Street Fighter II were removed entirely from the game.

A remake of the game, Super Street Fighter II Turbo HD Remix, was released on the PlayStation Network on November 25, 2008 for the PlayStation and on the Xbox Live Arcade on November 26 for the Xbox 360. The game features all the characters from Super Street Fighter II Turbo as well as high definition graphics drawn by UDON Entertainment, arranged music by OverClocked ReMix, and rebalanced gameplay. 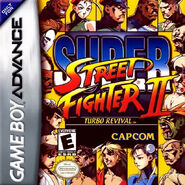 Let's Compare (Street Fighter II)
Add a photo to this gallery
Retrieved from "https://streetfighter.fandom.com/wiki/Super_Street_Fighter_II_Turbo?oldid=159544"
Community content is available under CC-BY-SA unless otherwise noted.