Not much is known about the abandoned castle itself, with few knowing where it is located, but its dojo is used by Ryu for training since he was a kid.[1]

Ryu's stage is set on the rooftops of the Suzaku Castle, 10 meters (32.8 feet) above the ground.[1] It has breakable signs on it reading Fūrinkazan (風林火山, Fūrinkazan? "Wind Forest Fire Mountain"), a shortened version of a quote from Sun Tzu's Art of War. The signs are present only in the original Street Fighter II, Hyper Street Fighter II: The Anniversary Edition, and Ultra Street Fighter II: The Final Challengers (Classic Graphics only). The same message is seen written on Ryu's belt in some of his appearances. Bats appear flying in the right side of the stage in some versions.[2]

Ryu's stage is set in Genbugahara (玄武ヶ原, Genbugahara?), an area near the Suzaku Castle, with the castle visible in the top of the mountains. While training in the area, a painter met Ryu in the plains and they had a short conversation.[3]

The Suzaku Castle reappears in Street Fighter III: 3rd Strike, where it is once again Ryu's home stage. The castle in Super Street Fighter II Turbo Revival appears exactly as it did in 3rd Strike, albeit at night. Revival also has a red-colored version which serves as Akuma's stage, as he didn't have one originally.

The Suzaku Castle appears as a DLC stage based on its Street Fighter II appearance. It was released on July 25th, 2017.

In Super Smash Bros. for 3DS/Wii U, the stage is designed to be used in its Omega Form (a single platform for combat) rather than its normal version; the latter features a number of different platforms, including two smaller ones on the left, and two larger ones on the right. The stage returns in Super Smash Bros. Ultimate and like all other stages in the game, it has an avalaible standard layout of Battlefield, a standard three-platform field featured in previous Super Smash Bros. games.

The stage features two long walk-off platforms on the right side, and two smaller floating platforms on the left side. Only the lower platform on the right is solid. The position of the lower-left platform is a fair distance away from the main platform, and provides a challenge for more than one character to stand on it, allowing for camping. Signposts located on the longest platform will break if a fighter is launched past them. The signposts are eventually repaired after all of them are broken.

The Ω form of the stage consists of only the main platform centered without the smaller platforms and walk-off areas. The signposts can be broken even on this version of the stage, making it the only Ω Form stage to have interactive parts, albeit them being static. Both Ryu Stage Type A and B and Ken Stage Type A and B will change to become faster on the Ω form as well.

In Super Smash Bros. Ultimate, the Ω form and Battlefield form are very similar to the Ω form in SSB 3DS/Wii U; however, the main platform is resized and reshaped to match Final Destination and Battlefield, respectively. The three soft platforms of the Battlefield form resemble the platform on the bottom left of the normal form. As with some other Ω forms, the stage select preview of the Ω form of this stage is an early version of the stage, and the final version differs slightly in design. 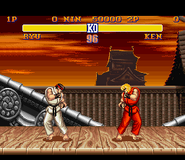 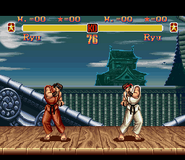 Suzaku Castle in The World Warrior