Suzaku Castle (朱雀城, Suzakujō?, lit. Vermilion Bird Castle) is a large and (presumably) Feudal-aged castle located in Japan. In all of its appearances in the Street Fighter series, as well as crossover games, it has served as Ryu's home stage.

Not much is known about the abandoned castle itself, with few knowing where it is located, but its dojo is used by Ryu for training since he was a kid.[1]

Ryu's stage is set on the rooftops of the Suzaku Castle, 10 meters above the ground.[1] It has breakable signs on it reading Fūrinkazan (風林火山, Fūrinkazan? "Wind Forest Fire Mountain"), a shortened version of a quote from Sun Tzu's Art of War. The same message is seen written on Ryu's belt in some of his appearances. Bats appear flying in the right side of the stage in some versions.[2]

Ryu's stage is set in Genbugahara (玄武ヶ原, Genbugahara?), an area near the Suzaku Castle, with the castle visible in the top of the mountains. While training in the area, a painter met Ryu in the plains and they had a short conversation.[3]

The Suzaku Castle reappears in Street Fighter III: 3rd Strike, where it is once again Ryu's home stage. The castle in Super Street Fighter II Turbo Revival appears exactly as it did in 3rd Strike, albeit at night. Revival also has a red-colored version which serves as Akuma's stage, as he didn't have one originally.

The Suzaku Castle appears as a DLC stage based on its Street Fighter II appearance. It was released on July 25th, 2017.

The castle is also in SNK vs. Capcom: The Match of the Millennium, where it is used as the background of each characters' rival battle. It is also one of the backgrounds in Street Fighter Online: Mouse Generation.

In Super Smash Bros. for Nintendo 3DS and Wii U, the stage is designed to be used in its Omega Form (a single platform for combat) rather than its normal version; the latter features a number of different platforms, including two smaller ones on the left, and two larger ones on the right. 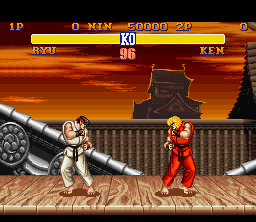 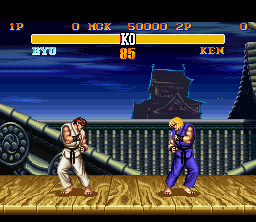 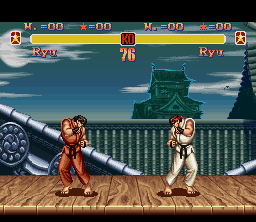 Retrieved from "https://streetfighter.fandom.com/wiki/Suzaku_Castle?oldid=157861"
Community content is available under CC-BY-SA unless otherwise noted.