The Swap Costume is an alternate costume designed for the playable characters of Street Fighter X Tekken, available as part of a Downloadable Content (DLC) package.

Each side's costumes are inspired by the other franchise; alternate costumes for Street Fighter characters are based off Tekken, and vice versa. Several of the Swap Costumes directly copy - or else are inspired by - the costume of another character of the opposing side. Capcom's official Japanese website has a rumor section accompanying several pictures, providing the source of inspiration for each costume.

The five PS3 and PS Vita exclusive characters (Mega Man, Pac-Man, Cole, Toro and Kuro) do not have Swap Costumes, nor alternate costumes. 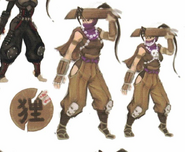