The title of this article

Needless to say, much of this information would have to be condensed and edited before being added. I would also have to search for sources and citations that could prove many of my claims about the truth of this character. If I could be permitted to make edits to this page, I believe It could greatly benefit it's overall content. Either that, or I could work on a seperate "Gouki" character wiki exploring these differences in cultural interpretation.

Hey, I've just seen the DLC trailer for Asura's Wrath and Ryu, Akuma and Evil Ryu appear there to fight Asura. Seriously, guys, somebody should edit the page.

I took this picture in 2008 in Wakayama, Japan while I was working there. It was on an older machine running Darkstalkers 3.

Maybe it's rendition of what a capcom designer thought Gouken would look like?
The mystery character certainly looks a lot more like Gouki (Akuma) than the SFIV version...
However, the first Capcom pic of Gouken is on SFA1's 1995 Gouki (Akuma) ending. Maybe this is a post SFA1 (Vampire Saviour was 1997) take on a planned but pulled Gouken inclusion in the SFA series??? 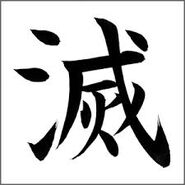 Destruction
Add a photo to this gallery
Retrieved from "https://streetfighter.fandom.com/wiki/Talk:Akuma?oldid=140156"
Community content is available under CC-BY-SA unless otherwise noted.