Executed by pressing Medium Punch and Medium Kick simultaneously, Seth dashes forward from one end of the screen to the other. During the dash, Seth can follow up with three different special moves depending on the input, or stop suddenly by pressing Medium Punch and Medium Kick again. If no directional input or buttons are pressed before the end of the dash, Seth slides to a halt and stops very close to his opponent.

The dash cancel is executed by pressing back during Tanden Booster. Seth comes to a complete stop. In order to get the most out of this follow-up, spatial awareness and offensive pressure are necessary. The dash cancel can be used to bait out unsafe moves or force the opponent to make a mistake. If Seth is close enough, he can cancel just in front of his opponent. Before they can react or retaliate, Seth can break through their defenses by going for a throw or use one of his normal to fish for a Counter Hit and start off a combo.

Hecatoncheires Glide is executed by performing a quarter-circle forward motion and pressing punch during Tanden Booster. Seth glides forwards with a barrage of punches surrounding him. Simlar to Hecatoncheires, this move does not knockdown and leaves the opponent in range for a mix-up on hit. The attack offers good corner carry. Besides being -2 on block, Hecatoncheires has decent pushback to make it harder to punish.

Mad Spiral is executed by performing a Shoryuken motion and pressing punch during Tanden Booster. Seth performs a Mad Cradle which moves upwards at a 45° angle rather than the normal trajectory. This move is useful against zoning characters. During the startup and active frames of Mad Spiral, Seth is invincible to projectile attacks. This move can also be linked from his Twin Claw target combo. Out of all the follow-up attacks, Mad Spiral inflicts the most damage and stun. He also can get good okizeme since he lands very close to his opponent. Unfortunately, this move is the least safest on block.

Spin Pendulum is executed by performing a quarter-circle back motion and pressing kick during Tanden Booster. Seth performs a pirouette followed by a launching kick. Similar to Cruel Disaster, Seth is invincible to projectiles during the pirouette, making is useful against zoning characters. The final hit of the attack launches the opponent in the air like the EX version. Seth can follow-up with EX Hecatoncheires for extra damage and corner carry. However, this move is still punishable since it leaves Seth -9 on block. 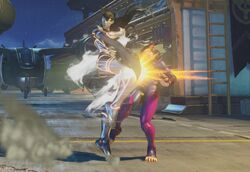 While Seth loses the ability to steal moves with the Tanden Engine, Tanden Booster gives him three different follow-ups that all grant V-Meter. It can be cancelled from Seth’s target combo and Standing Heavy Punch. While his first V-Skill requires management of Install Arts as well as knowledge of optimal and practical combos that come with it, Seth's second V-Skill is easier to use.

Tanden Booster (Stop)
Add a photo to this gallery

Retrieved from "https://streetfighter.fandom.com/wiki/Tanden_Booster?oldid=214230"
Community content is available under CC-BY-SA unless otherwise noted.