Tanuki (狸, タヌキ or たぬき, [tänɯᵝki]?), also known as the Japanese raccoon dog, is a puzzling animal species in the order Carnivora (ネコ目, Neko-moku?), family Canidae (イヌ科, Inu-ka?), genus Nyctereutes (タヌキ属, Tanuki-zoku?) that has been significant in Japanese folklore since ancient times. The legendary tanuki is reputed to be mischievous and jolly, a master of disguise and shapeshifting, but somewhat gullible and absentminded.

In the Street Fighter series, tanuki are common near Ibuki's ninja village, and she has a pet tanuki named Don-chan. The village has a tanuki population of 256.[1]

Ibuki tends to have many Tanuki themed aesthetics. Some of these include, Raccoon tails on outfits, Raccoon faces on her weapons (EG Smoke Bomb), and even a scrapped Raccoon outfit.

The most notable of Ibuki's Ninja Village Tanuki[edit | edit source]

Cars[2]
Don-chan (どんちゃん, Don-chan?) is Ibuki's pet tanuki that has been with her since its birth. Don-chan is the only tanuki from the ninja village able to use Ninjutsu. It can be told apart from other tanuki by the cloth wrapped on its tail.

In Ibuki's Street Fighter 30th Anniversary Collection profile, Don-chan is said to follow her around just about everywhere. Even appearing in the background in some stages in Street Fighter III: New Generation when Ibuki is fighting.

While Don-chan isn't shown following Ibuki in more recent games, it is highly implied Don-chan is still with Ibuki, as he is referenced to by many characters, such as Cammy and Jack X talking about Don as if he was on the area after they defeat Ibuki.

In Capcom's web game, Neco Drop, Ibuki's cat is known as Ms. Donka. Despite supposed to be a cat, Ms. Donka looks more like a tanuki and has Don-chan's tail ribbon. One of Ms. Donka's quotes suggest that she is actually a tanuki pretending to be a cat. 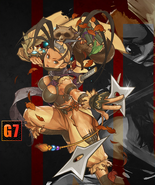 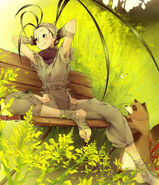 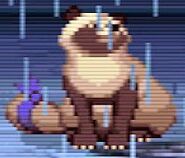 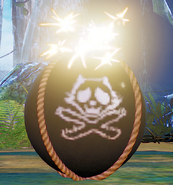 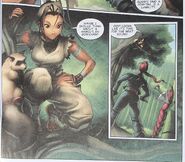 Her outfit even has Don-chan's signature tail ribbon on it.

The tail accessory in Ibuki's Swap outfit in SFXTK is stated to be a reminder for her of Don-chan in it's description while she works for Yoshimitsu's clan.

Don-chan sad.
Add a photo to this gallery

Retrieved from "https://streetfighter.fandom.com/wiki/Tanuki?oldid=225654"
Community content is available under CC-BY-SA unless otherwise noted.