Tatsunoko vs. Capcom: Cross Generation of Heroes/Ultimate All Stars

Tatsunoko vs. Capcom: Cross Generation of Heroes, retitled Tatsunoko vs. Capcom: Ultimate All Stars for the international release, is a crossover fighting game featuring characters from the Japanese animation studio Tatsunoko Production and Capcom. It was originally released exclusively in Japan in December 2008, but the Wii version is now available in North America and Europe. Licensing issues involving Tatsunoko characters initially forced the game to remain a Japanese exclusive. However, Capcom worked to deal with these issues leading the Wii game to be localized outside of Japan.[1][2]

The game is the seventh installment in the company's Versus series, which includes the Marvel vs. Capcom and Capcom vs. SNK games. Each player has a team of two characters and players can switch their characters at any time, and even perform two hyper combos at the same time (which however uses three special bars). However, large characters, such as Tatsunoko's Gold Lightan and Capcom's PTX-40A fight on their own without a partner. Producer Ryouta Niizuma announced the inclusion of minigames and the option for a simplified control scheme. The game has support for the Classic Controller and the Gamecube Controller as well. The buttons are listed as "Assist" "Weak" "Medium" and "Strong".

Universal mechanics are similar to the previous Marvel vs. Capcom games. Characters can call their partner to do a predefined Variable Assist attack. Characters can tag with another character, performing an attack upon entry called a Variable Attack. Performing a Variable Counterattack also lets the player tag out with another character. Snapback is an attack that forces the opponent to switch characters should it land. Hyper Variable Combination lets characters of one team perform their Hyper moves, attacks that require a stock of level, at the same time, whereas Delayed Hyper Cancelation cancels a current Hyper move of the character with another Hyper move of the character's partner. Each character has a launcher to send the opponent to the air, allowing the character to do an Aerial Rave.

The large characters (Gold Lightan and PTX-40A) cannot do the universal techniques that require a partner due to their single-character limit.

Tatsunoko vs. Capcom was conceived when Tatsunoko Production asked Capcom to develop a game with Tatsunoko characters. Capcom producer Ryota Niitsuma was interested in producing a fighting game and agreed with other Capcom employees that Tatsunoko's characters would be better suited for a Vs. game than a Street Fighter game.[3] The resulting project was the seventh Capcom-designed entry in the Vs. series and the first in over seven years.[4] In the 2000s decade, fighting games were less popular and plentiful than in the mid-1990s, with multiplayer competition shifting towards other genres, such as shooters.[5]

The research and development team started work in parallel with Street Fighter IV. "Capcom [hoped to] bring back the fighting genre into the mainstream market [...] with a serious fighting game for very hardcore fans, and another with a slightly lowered barrier to entry," Niitsuma said.[6] Eighting, Capcom's hired developer, took on the job in early 2007. The design of the game was a departure from the complex attack systems of the Street Fighter series and of certain Vs. titles. The game is built around a simplified three-button attack system (light, medium, and strong); it was inspired by the control systems commonly used by both the Vs. series and the Wii, which allows intricate moves to be performed with basic control inputs.

On May 22, 2008, Capcom announced the game, titled Tatsunoko vs. Capcom: Cross Generation of Heroes, for release in Japanese arcades.[7] The arcade cabinets' system board' proprietary hardware is based on the Wii.[8] Beta units were sent to test locations in Tokyo (July 10–13) and Osaka (July 25–27). By September, the game was 70% complete and a Wii version was announced for Japanese release. Capcom gradually revealed the game's cast until release. It was released in Japan on the Wii on December 11, 2008 and an arcade version followed in mid-December 2008.

The game is the first Capcom-designed Vs. installment to be rendered fully in 3D. Tatsunoko vs. Capcom and its graphical characteristics were optimized for the Wii, which prevents the game from being ported to other consoles without completely re-building the game. Niitsuma explained that its Wii exclusivity was also due to a lack of Capcom fighting games for the console and because the Wii's casual quality matches the Vs. series trait of accessibility. The producer suggested that porting a sequel would be easier, but that Capcom would gauge the reception of the Wii game before making such plans.[9]

When choosing candidates for the Tatsunoko and Capcom character rosters, the development team was free to nominate any character it wished.[11] However, the team faced limitations on its Tatsunoko candidates; Niitsuma explained; "[the development team] had to consider licensing issues. Once [they] had that list [they] had to figure out how to make a balanced fighting game. On top of that [they] wanted a good balance between male and female characters." Selection emphasis was placed on main characters, rather than on villains. Certain characters were denied by Tatsunoko Production without explanation to Capcom. Niitsuma said: "We weren't privy to a lot of their decision making process. They didn't share a lot of reasons with us. When they said no and we asked why, they wouldn't tell us, but would give us another suggestion". Tatsunoko Production disallowed characters from Genesis Climber MOSPEADA or Samurai Pizza Cats, despite the high number of fan requests for the latter.[12] The eponymous characters of Tatsunoko's Muteking, The Dashing Warrior and Nurse Witch Komugi were among those planned for inclusion, but were eventually scrapped.[13][14][15] The finalized Tatsunoko cast consists of characters that the team enjoyed in their youth. At one point, Go Mifune from Mach Go Go Go (known as Speed Racer in International territories) was considered as a potential fighter, but difficulties on assembling a moveset aside from those enabled by his car made him difficult to implement.[16]

As for Capcom candidates, the development team hoped to include Phoenix Wright and Franziska von Karma from the Ace Attorney series, but while the latter's use of a whip made her easy to incorporate, the problems the team had with the former's game mechanics (specifically his movement and the Ace Attorney text bubbles) prevented them both from getting in.[17] Other Capcom characters who were considered for inclusion were Arthur from Ghosts 'n Goblins, Ingrid from Capcom Fighting Evolution and Street Fighter (as shown in the game's Secret File book, she was however used as a test character model), Charlie Nash,[15] Ibuki[15] and M. Bison[15] also from Street Fighter, a Tyrant (unclear which one specifically) and Leon from Resident Evil,[15] Date Masamune from Sengoku BASARA,[15] Hsien-Ko from Darkstalkers,[15] Zero Gouki from Cyberbots,[15] Tiara from Gaia Master,[15] Rouge from Power Stone,[15] June from Star Gladiator,[15] Nero from Devil May Cry[15] and The Smith Syndicate from Killer7.[citation needed]

On September 9, 2009, Capcom announced the Japanese release of Ultimate All-Stars and starting on that day, periodically revealed the game's new characters; however, the full cast was leaked through JavaScript code on the game's official Japanese site.[18] With the exception of Hakushon Daimaō, who was removed due to unspecified licensing issues, every playable character from the original Wii release was included. Hakushon Daimaō was also removed in Ultimate All-Stars version's Japanese release, due to both his unpopularity with players and the game's status as a localization of the North American version.[19]

The new characters encompassed Frank West from Dead Rising, Zero from Mega Man X, Yatterman 2 from Yatterman, Joe the Condor from Gatchaman and the title character from Tekkaman Blade.

On May 6, 2009, Capcom listed two "mystery games" as part of their Electronic Entertainment Expo 2009 lineup. The Nintendo Power magazine revealed "Capcom Mystery Game #1" to be the North American localization of Tatsunoko vs. Capcom: Cross Generation of Heroes, with the new subtitle "Ultimate All-Stars". It was playable at the company's E3 booth.

European and Australian releases were announced on later dates. The game was originally unintended for release outside Japan, but was localized by Capcom due to positive fan reception. Tatsunoko Production assisted Capcom with its character licensing issues; while Tatsunoko Production holds such rights in Japan, they are licensed to companies such as Time Warner in other countries. Niitsuma said that acquiring character licenses was difficult, as it was largely done one at a time, and characters cleared in North America had to be checked separately in Europe. Another issue was the possibility that Eighting would be occupied with other projects. Time constraints led Niitsuma to replace the character-specific minigames of Cross Generation of Heroes with "Ultimate All-Shooters", an expansion of PTX-40A's minigame.

A Capcom press release in June 2009 stated that the North American release would have more mini-games, an "enhanced" story mode, and support for online play. The roster would be expanded by five characters, but would lose one unnamed Tatsunoko character.[21] However, Capcom later revised this press release, as it was incorrect, with the statement that they were "looking into adding new features to the game, including possible additions of several new characters from both Capcom and Tatsunoko and [...] exploring the option of online gameplay.

An official launch event for Tatsunoko vs. Capcom: Ultimate All Stars was held at the Nintendo World Store in the Rockefeller Center on January 23, 2010, featuring autograph signings by Niitsuma, giveaways, competitions, and playable demo kiosks. Hundreds of fans were expected to attend between 11 pm and 3 pm. The game was released in North America on January 26, in Japan on January 28, and in Europe on January 29.

Certain versions of Tatsunoko vs. Capcom: Ultimate All-Stars are bundled with a Mad Catz arcade stick, whose artwork was produced by Japanese artist Shinkiro. Pre-orders from GameStop included eight of thirteen lenticular trading cards. As a buying incentive, Capcom's Japanese online store offered a Secret File compilation book of concept art, illustrations and design notes; it is the twenty-seventh volume of the Secret File series, which was originally published between 1996 and 1999 as a supplement to Capcom games of the time.[23]

The store also included an audio CD with four vocal tracks from the game: the opening song from Cross Generation of Heroes, "Across the Border", sung by Asami Abe, Ultimate All-Stars English re-recording of this song, sung by Anna Gholston, with rap by James C. Wilson; and the Japanese and English versions of Roll's theme song.

Capcom's former community manager Seth Killian expressed satisfaction with the North American sales of Ultimate All-Stars. "[Tatsunoko Vs Capcom] certainly beat the initial expectations. It didn't set any land speed records, but it was a success," Killian stated. "And that's really saying something considering that we're talking about a game that was not only never coming out, but has a title that most people can't even pronounce."[24] In Japan, Ultimate All-Stars sold 18,913 units as of January 2, 2011,[25] and, as of December 27, 2009, Cross Generation of Heroes has sold 62,805 units.[26]

Logo for the game.

Joe and Karas vs. Ken and Jun 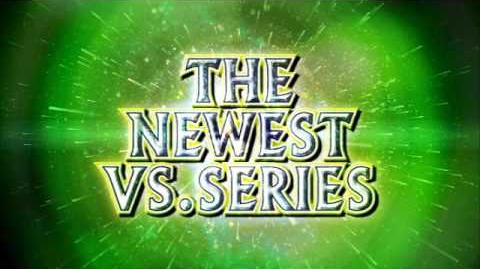 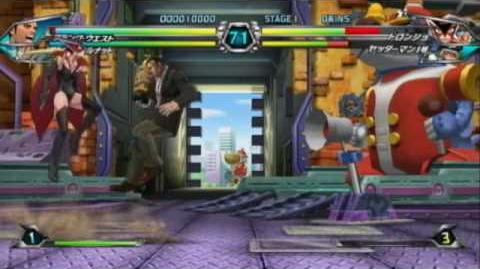