Tatsunoko vs. Capcom: Cross Generation of Heroes/Ultimate All Stars

Tatsunoko vs. Capcom: Cross Generation of Heroes (タツノコ VS. CAPCOM CROSS GENERATION OF HEROES, Tatsunoko vs. Capcom: Cross Generation of Heroes?), retitled Tatsunoko vs. Capcom: Ultimate All Stars for the international release, is a crossover fighting game featuring characters from the Japanese animation studio Tatsunoko Production and Capcom. It was originally released exclusively in Japan in December 2008, but the Wii version is now available in North America and Europe. Licensing issues involving Tatsunoko characters initially forced the game to remain a Japanese exclusive. However, Capcom worked to deal with these issues leading the Wii game to be localized outside of Japan.[1][2]

The game is the seventh installment in the company's VS. Series, which includes the Marvel vs. Capcom and Capcom vs. SNK games. Each player has a team of four team of two and team of one, and players can switch their characters at any time, and even perform four and two special moves at the same time (which however uses up four and two special bars). However, large characters, such as Tatsunoko's Gold Lightan and Capcom's PTX-40A fight on their own without a partner. Producer Ryouta Niizuma announced the inclusion of minigames and the option for a simplified control scheme. The game has support for the Classic Controller and the Gamecube Controller as well. The buttons are listed as "Assist" "Weak" "Medium" and "Strong".

Universal mechanics are similar to the previous Marvel vs. Capcom games. Characters can call their partner to do a predefined Variable Assist attack. Characters can tag with another character, performing an attack upon entry called a Variable Attack. Performing a Variable Counterattack also lets the player tag out with another character. Snapback is an attack that forces the opponent to switch characters should it land. Hyper Variable Combination lets characters of one team perform their Hyper moves, attacks that require a stock of level, at the same time, whereas Delayed Hyper Cancellation cancels a current Hyper move of the character with another Hyper move of the character's partner. Each character has a launcher to send the opponent to the air, allowing the character to do an Aerial Rave.

The large characters (Gold Lightan and PTX-40A) cannot do the universal techniques that require a partner due to their single-character limit.

Logo for the game. 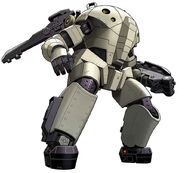 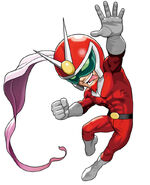 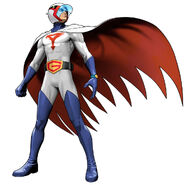 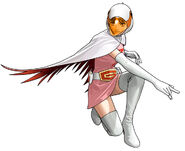 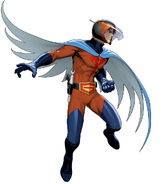 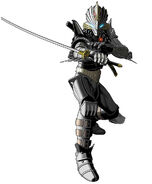 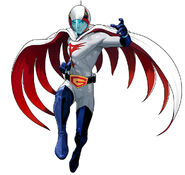 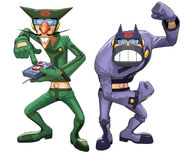 Retrieved from "https://streetfighter.fandom.com/wiki/Tatsunoko_vs._Capcom:_Cross_Generation_of_Heroes?oldid=54710"
Community content is available under CC-BY-SA unless otherwise noted.