Temple Hideout, originally known as Ramayana Temple (ラーマーヤナ寺院, Rāmāyana Jiin?), is M. Bison's stage in the Street Fighter II series. The stage is set in Shadaloo's secret base in Thailand, in a temple with a bell and two breakable statues.

The bell rings, indicating the start of the fight, and people gathered to watch it. Someone challenged M. Bison to a fight. It doesn't matter for Bison the challenger's motives, be it for a grudge against him or simply to test his strength, in the end of the battle the challenger will understand Bison's true power at the cost of his life. Bison takes off his cape, showing that he will fight without restraint.[1] The match becomes an one-sided massacre as the challenger is overwhelmed by M. Bison's Psycho Power, Bison having an evil smile as he pummels his opponent. Despite the odds, the challenger is determined to win, giving his best in the battle.[2]

Akuma is also fought in this stage when reached as a secret boss in some versions of the game.

The stage returns as a DLC stage named Temple Hideout. Notable differences include moving the statues closer to the large bell and they no longer break when an opponent is slammed near them.[3]

In the Archie Comics crossover Worlds Unite, M. Bison destroyed Blizzard Buffalo when the later attempted to set an Unity Engine in the temple, learning from him about Sigma's plans and gathering the Four Kings to face the one that dared to invade "his" world. 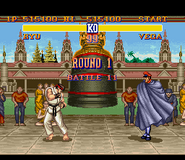 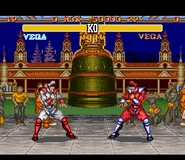 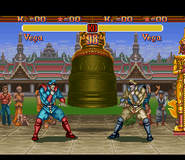 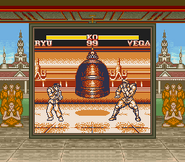 Temple Hideout in Street Fighter V.
Add a photo to this gallery

Retrieved from "https://streetfighter.fandom.com/wiki/Temple_Hideout?oldid=220494"
Community content is available under CC-BY-SA unless otherwise noted.