"Here I go! (必殺！, Hissatsu!?)"
—Yang (Ultra Street Fighter IV)
"Because of your sloppy defense, I got to finish you with my Tenshin-senkyutai!"
—Yang in Street Fighter III: 2nd Impact

The Tenshin Senkyutai (転身穿弓腿, Tenshin Senkyuutai?, "Turnover Drilling Bow Thigh") is one of Yang's special attacks (and formerly, Yun's prior to 2nd Impact), introduced as his second Super Art in the Street Fighter III series.

The attack begins with a Senkyutai attack that hits twice. What happens next depends on the game.

Yang follows the Senkyutai with three forward high kicks to the face, similar to his older brother's Nishokyaku.

Yang follows the Senkyutai with a flurry of upward kicks before finishing with two forward high kicks to the face which sends the opponent hurtling away. The attack is a 16-hit combo if the Senkyutai lands. If it did not hit the opponent cleanly or was used in a juggle combo, Yang will perform the move in a visually similar manner to the 3rd Strike counterpart while calling the move's name.

Tenshin Senkyutai has two stocks and offers the most EX Specials of Yang's Super Arts in the Street Fighter III series, and provides many opportunities to combo into it. The move is useful as an anti-air or a juggle, since the initial Senkyutai travels forward to where the opponent is. It also travels under fireballs and works as a solid counter to them. It is also a decent punishing tool, albeit weaker in terms of damage compared to his other Super Arts and Ultra Combo, and shares roughly the same higher priority over other moves.

A favorite tactic among Yang (and formerly Yun) users in the Street Fighter III games is to cancel into this move from Yang's punch target combo or a Byakko Soshoda. Yang can also combo into this move right after a crouching medium kick for an unexpected low attack, and can land it cleanly following an airborne heavy attack (kick or punch).

In Super Street Fighter IV: Arcade Edition, an EX Byakko Soshoda provides a good window to initiate the Ultra Combo; the window can be made larger by landing the Byakko Soshoda after a Focus Attack, although this will scale the Ultra's damage significantly. Of course, like with many other Ultra Combos, Tenshin Senkyutai can connect easier after a Focus Attack, and does so more reliably than his Raishin Mahhaken, where a dash cancel towards the Ultra Combo may be necessary to connect.

Final hit vs Ibuki
Add a photo to this gallery 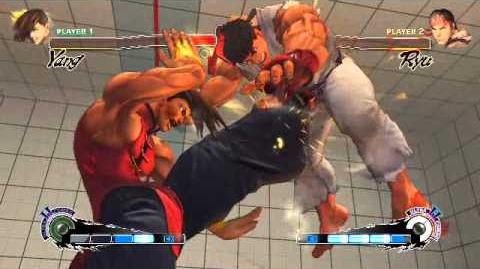